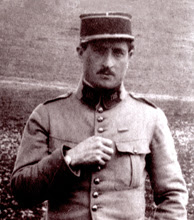 Albert-Paul Granier was born at Le Croisic in the Loire-Atlantique region of France, on 3rd September 1888.

Called up for military service on 3rd August 1914, Albert-Paul saw action with the French Artillery from the start, mostly in the Verdun area.

In 1917, Albert-Paul became an air observation officer, radioing to the gunners on the ground where to direct their fire.  His plane was shot down in flames at Bois Bourrus, near Verdun on 17th August 1917.  His body was never found.

Albert-Paul’s WW1 collection, "Les Coqs et les Vautours", was published shortly before his death and has now been translated into English. “Cockerels and Vultures” – translated by Ian Higgins - published by Saxon Books.

With grateful thanks to Régine Verguier for sending me this link to an excellent aritcle about WW1 poets, writers and artists: https://france3-regions.francetvinfo.fr/paris-ile-de-france/2014/09/03/de-peguy-apollinaire-une-generation-d-artistes-victimes-de-la-grande-guerre-543058.html
Posted by Lucy at 04:22