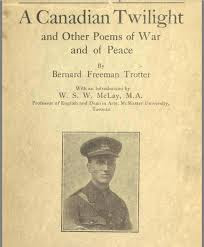 Bernard was born in Toronto on 16th June 1890. His father was a Baptist Minister - The Reverend Professor Thomas Trotter - and his mother was Ellen M. Freeman Trotter. Bernard had an older brother, Reginald.   Professor Trotter was a lecturer at McMaster University in Toronto, before becoming President of Acadia Universityin Nova Scotia.

Educated at Horton Collegiate Academy in Wolfville, Nova Scotia, where the family moved when he was five, Bernard went on to Woodstock College. He wrote his first known poems at the age of fourteen. As Bernard’s health was not good, his doctor advised him to spend some time in California, so he and Reginald went to California for three years where they worked on a lemon farm for a year.

After that, Bernard taught privately for a year, then at a school in California. He returned to Canada and studied at McMaster University, Toronto, where he edited the magazine “McMaster University Monthly”, in which some of his poems were published.  Bernard had a poem accepted by “Harper’s Magazine” in 1914.

Turned down for military service in the Canadian Army due to his poor health, in March 1916,
Bernard travelled to Britain to volunteer for the British Army. After training at Shorncliffe and Oxford, where he was based at Keble College, Bernard was commissioned into the Leicester Regiment.   This was a coincidence for his father was born in Leicestershire.

Posted to the Western Front in December 1916, Bernard was attached to a Pioneer Battalion. His Commanding Officer said “Bernard was one of the coolest men I have ever seen under shell fire. Bernard was killed on 7th May 1917 and was buried in the Military Cemetery at Mazingarbe.

After his death, Bernard’s father had his son’s poems published under the title “The Canadian Rupert Brooke A Canadian Twilight and Other Poems of War and of Peace” by McLelland, Goodchild and Stewart, Toronto in 1917.

This is available as a free down-load on www.archive.org

Source: “The Canadian Rupert Brooke A Canadian Twilight and Other Poems” with an Introduction by W.S.W. McLay (by McLelland, Goodchild and Stewart, Toronto, 1917)