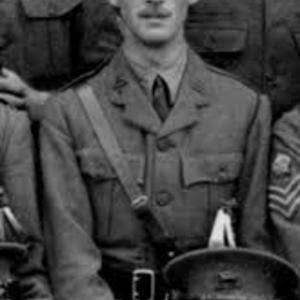 Philip Johnstone was the pen-name of Lieutenant John Stanley Purvis (1890 – 1968) who wrote the poem entitled “High Wood” in 1918, while serving on the Somme

John Stanley Purvis was born in Bridlington, Yorkshire, UK on 9th May 1890. John’s parents were John Bowlt Purvis, a Pharmacist, and his wife Charlotte Annie Purvis, nee Parnell.  After studying classics and history at Cambridge University, John became a teacher and taught at Cranleigh School in Surrey.

During the First World War, he was commissioned into the 5th Bn Yorkshire Regiment and was invalided out of the army when he was wounded during the Somme Offensive. He returned to Cranleigh initally, then became an Anglican church priest. In 1938, he moved to York. Here he gained international recognition as the translator of the York Mystery Plays and was awarded the OBE for work on the York Minster Archives. He died in 1968.

Ladies and gentlemen, this is High Wood,
Called by the French, Bois des Fourneaux,
The famous spot which in Nineteen-Sixteen,
July, August and September was the scene
Of long and bitterly contested strife,
By reason of its High commanding site.
Observe the effect of shell-fire in the trees
Standing and fallen; here is wire; this trench
For months inhabited, twelve times changed hands;
(They soon fall in), used later as a grave.
It has been said on good authority
That in the fighting for this patch of wood
Were killed somewhere above eight thousand men,
Of whom the greater part were buried here,
This mound on which you stand being...
Madame, please,
You are requested kindly not to touch
Or take away the Company's property
As souvenirs; you'll find we have on sale
A large variety, all guaranteed.
As I was saying, all is as it was,
This is an unknown British officer,
The tunic having lately rotted off.
Please follow me - this way ...
the path, sir, please
The ground which was secured at great expense
The Company keeps absolutely untouched,
And in that dug-out (genuine) we provide
Refreshments at a reasonable rate.
You are requested not to leave about
Paper, or ginger-beer bottles, or orange-peel,
There are waste-paper-baskets at the gate.


However, on the Great War Forum, the late, great Sue Light had this to say: “For a while now I've been trying to find some sort of primary evidence that this poem was actually written by John Stanley Purvis. Internet searches throw up a connection, but it seems to have become 'factoid' rather than having its basis in fact.

John Stanley Purvis was [honestly!] the author of another poem called 'Chance Memories' which has been some inspiration for the part of my website about the men of Steyning who died in the Great War. He wrote this poem under the name 'Philip Johnson' and somehow an assumption has been drawn that he also wrote 'High Wood,' but I can trace no evidence that this is so - the story just seems to be growing!

I'd be only too pleased if the two were one and the same - more kudos for 'my' Philip Johnson, and I'd be grateful for firm sources that connect the two. Just for the record, this is the other poem:

High in the sun. The wind comes off the sea, and oh the air!

I never knew till now that life in old days was so fair.

But now I know it in this filthy rat infested ditch

Where every shell must kill or spare, and God alone knows which.

And I am made a beast of prey and this trench is my lair.

My God I never knew till now that those days were so fair.

I can't forget the lane that goes from Steyning to the Ring.

In 2000, the people of Steyning, Sussex, erected a memorial to the men of the town who died in the Great War, in a rather remote spot on a lane leading up to the South Downs – Mouse Lane. It takes the form of a low stone plaque on the roadside, and although it carries no names, it is inscribed with a poem by ‘Philip Johnson’, the pseudonym of Lieutenant John Stanley Purvis, 5th Battalion, Yorkshire Regiment [1890-1968]. He wrote this poem in December 1915 while in France, and later on became a church historian and archivist, and was a Canon at York Minster. 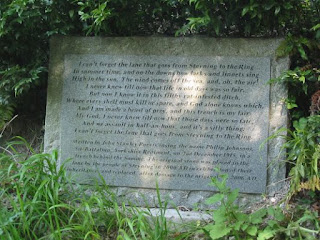 However, in another comment we discover that, following the death of Canon J.S. Purvis, his family began searching the family news cuttings albums to find an article published in the “Sunday Times” newspaper of 22nd May 1927. Their mother preserved the copy at the time for she knew the pen name Philip Johnson was that of her elder son John Stanley The poem was sent without the author’s knowledge to the Press by his friend, a Quaker doctor, serving with the Red Cross.