While doing some research yesterday, I came across a reference to a poem written during the First World War specifically for recitation and it got me thinking – again – about the wide variety of poems written during that time.  “Woman, clever woman” was written in praise of WW1 nurses by Arthur Hillcoat and “recited by the Great Mac (Major Mac), amid deafening applause at the London Halls”. (Reilly, p. 169).  The poem was published privately, as a broadside, in 1918. A broadside is a large sheet of paper printed on one side only. Historically, broadsides were used as posters, announcing events or proclamations, commentary in the form of ballads, or simply advertisements.

The First World War brought increased popularity for music halls and both the artists and composers threw themselves into rallying public support and enthusiasm for the war effort. Along with patriotic songs, patriotic poems were also widely recited.

Poems written for public performance brought success to poets Rudyard Kipling and Harold Begbie during the Second Boer War.  Kipling’s "The Absent-Minded Beggar", written in 1899, was set to music by Sir Arthur Sullivan and often accompanied by an illustration of a wounded but defiant British soldier, "A Gentleman in Khaki", by the artist Richard Caton Woodville. The song was written as part of an appeal by the “Daily Mail” newspaper to raise money for soldiers fighting in the Second Boer War and their families. The fund was the first such charitable effort for a war.

The chorus of the song exhorted its audience to "pass the hat for your credit's sake, and pay– pay– pay!" The patriotic poem and song caused a sensation and were constantly performed throughout the war and beyond. Kipling was offered a knighthood shortly after publication of the poem but declined.

When Harold Bebie’s Boer War poem, "The Handy Man", was published in “The Globe”, some hours later he received a long telegram from the newspaper, saying that Lady Beerbohm Tree was begging urgently for permission to recite the verses at the Palace Music Hall. “The Globe” was a London evening newspaper published from 1803 to 1921. It was founded by Christopher Blackett, the coal mining entrepreneur from Wylam, Northumberland, who commissioned the first commercially useful adhesion steam locomotives in the world.  “The Globe” merged with the “Pall Mall Gazette” in 1921. Under the ownership of Robert Torrens during the 1820s the newspaper supported radical politics, and had a reputation associating it closely with Jeremy Bentham. By the 1840s it was more mainstream, and received briefings from within the Whig administration. By 1871 it was owned by a Tory group headed by George Cubitt, who brought in George Armstrong as editor. Shortly before the First World War, “The Globe” was controlled by Max Aitken.

William Maxwell Aitken, 1st Baron Beaverbrook, PC, ONB (25 May 1879 – 9 June 1964), generally known as Lord Beaverbrook, was a Canadian-British newspaper publisher and backstage politician who was an influential figure in British media and politics of the first half of the 20th century.

Helen Maud Holt (5 October 1863 – 7 August 1937), known as Mrs Beerbohm Tree and later Lady Tree, was an English actress. She was the wife of the actor Herbert Beerbohm Tree and the mother of Viola Tree, Felicity Tree and Female Poets of WW1 Iris Tree.

Arthur Hillcoat is proving hard to research.  According to Historian Geoff Harrison who found this mention in Paul Maloney's book "Scotland and the Music Hall 1850 - 1914", he may have been a music hall artist from Scotland.  There was a family called Hillcoat living in London Street, Glasgow, Blackfriars, Lanarkshire, Scotland in 1901 - father and son both called Arthur. The father was a musical agent and the mother - Susan Cairns Hillcoat was a vocalist. 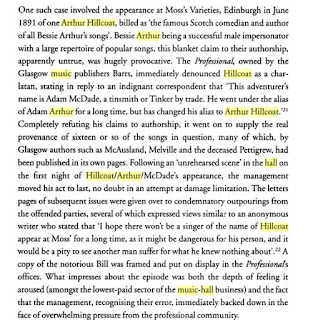 Information supplied to me by Harold Begbie's relative Roger Quin