Author of the hymn 'O Valiant Hearts' which written to honour the war dead of the First World War.


With thanks to Geoff Harrison for finding this poet. 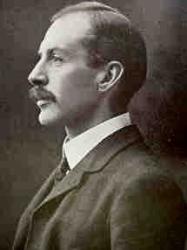 John was the great-great grandson of the cotton-spinning industrialist Sir Richard Arkwright.  Educated at Eton and Christ Church, Oxford, where he won the Newdigate Prize for English Poetry in 1895, in the 1900 general election John was elected as MP for Hereford, a position he served in until his resignation in 1912.  In April 1902 he was appointed private secretary (unpaid) to Gerald Balfour, President of the Board of Trade.

In 1905, John maried Helen Mariel Stephanie Robinson and the couple had a son John Richard Steven, born in 1907.

O valiant hearts who to your glory came
Through dust of conflict and through battle flame;
Tranquil you lie, your knightly virtue proved,
Your memory hallowed in the land you loved.

Proudly you gathered, rank on rank, to war
As who had heard God’s message from afar;
All you had hoped for, all you had, you gave,
To save mankind—yourselves you scorned to save.

Splendid you passed, the great surrender made;
Into the light that nevermore shall fade;
Deep your contentment in that blest abode,
Who wait the last clear trumpet call of God.

Long years ago, as earth lay dark and still,
Rose a loud cry upon a lonely hill,
While in the frailty of our human clay,
Christ, our Redeemer, passed the self same way.

Still stands His cross from that dread hour to this,
Like some bright star above the dark abyss;
Still, through the veil, the Victor’s pitying eyes
Look down to bless our lesser Calvaries.

These were His servants, in His steps they trod,
Following through death the martyred Son of God:
Victor, He rose; victorious too shall rise
They who have drunk His cup of sacrifice.

O risen Lord, O Shepherd of our dead,
Whose cross has bought them and whose staff has led,
In glorious hope their proud and sorrowing land
Commits her children to Thy gracious hand.

John’s WW1 collection was entitled “The Supreme Sacrifice and Other Poems in Time of War” (Skefington, 1919).