When the family were in Britain, they lived in a house in South Kensington, London.  After attending Winchester School, Richard went on to study medicine in London’s St. Bartholomew’s Hospital.

In 1914, when war broke out, Richard was in Florence.   He returned to Britain and offered his services to the Red Cross and the Royal Army Medical Corps – who said he was not needed.  He was commissioned into the Loyal North Lancashire Regiment, promoted to the rank of Temporary Captain and sent to the 10th Service Battalion.  They were posted to the Western Front on 3rd July 1915, where he became a Company Commander a few months later.   The Adjutant of the Regiment was Richard’s friend Desmond Coke, who wrote the Foreword to the collection of poems written by his friend Richard Dennys and published in 1917 by The Bodley Head - "There is no Death, Poems... With a foreword by Desmond Coke, and a portrait, etc. by Richard Molesworth Dennys and Desmond Francis Talbot Coke"

Captain Richard Molesworth Dennys was wounded on 12th July 1916 during the Somme Offensive.  He died of his wounds on 24th July and was buried in St. Sever Cemetry, Rouen, France - Grave Reference: Officers A 4 7.  Richard’s poems were included in two WW1 poetry anthologies. 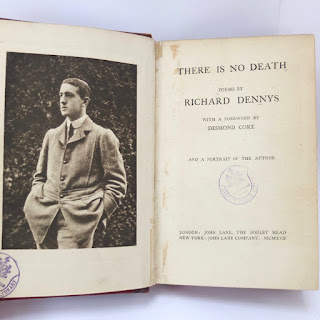 “Come When It May”

Come when it may, the stern decree
For me to leave the cheery throng
And quit the sturdy company
Of brothers that I work among.
No need for me to look askance,
Since no regret my prospect mars.
My day was happy ~ and perchance
The coming night is full of stars.