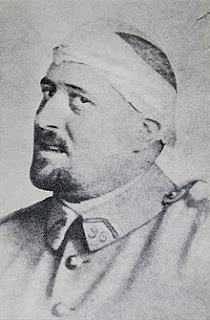 Wilhelm Albert Wladzimierz Kostrowicki was born on 26th August 1880 in Rome, Italy.  His mother was Polish aristocrat Angelika Kostrowicka and his father is believed to have been a General in the Russian Imperial Army who was killed during the Crimean War.   Apollinaire was brought up by his mother in the South of France and educated in France and Morocco.

Apollinaire, as he became known, was brought up to speak French, Italian and Polish fluently.  He moved to live in Paris during the early 1900s when it was THE place for artists, poets and writers of the time.  Among his friends were Matisse and Picasso.  In Paris, Apollinaire worked as a journalist for the French newspaper “Le Matin”.


Apollinaire joined the French Army in the First World War and was wounded in the head by Shrapnel on 17th March 1916, wounds from which he never fully recovered.   He coined the term ‘Surrealism’ to describe the ballet “Parade” which was performed in  Paris in  1917 with music by Erik Satie, scenario by Jean Cocteau, costumes and sets by Pablo Picasso and choreography by Léonide Massine, who starred in the ballet.   Apollinaire is also credited with having invented the calligramme -  or graphic poem – from the words ‘calligraphie’ and ‘idéogramme’: 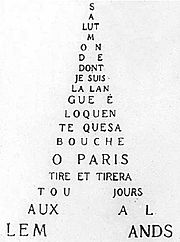 Apollinaire died in the Influenza Epidemic on 9th November 1918 and is buried in the Père-Lachaise Cemetery in Montmartre, Paris.   Soon after his death, his WW1 poetry collection “Calligrammes poèmes de la paix et de la guerre 1913 - 1916” was published by Mercure de France.   Perhaps his most famous collection is ‘Alcools’ which was published in 1913. 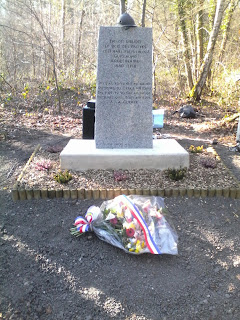 John Dennison and his partner were invited to attend the Centenary Ceremony to commemorate the moment at 16.00 hours on 17th March 1917 when Apollinaire was wounded.   The Ceremony was held in the woods outside the village of La Ville-aux-Bois lès Pontaret in Aisne, Nord-Pas-de-Calais- Picardie, France on 17h March 2017 where a memorial marks the place where Apollinaire fell.  John was kind enough to send me some photographs taken at the ceremony.

The ceremony was organised by Monsieur Frank Vitart, Cultural Affairs Organiser of the Conseil General du Departement de l'Aisne and was attended by more than a hundred people.
With thanks to John Dennison for sending me the photographs of the remembrance ceremony and for reminding me that I had not yet written up an exhibition panel for Apollinaire.