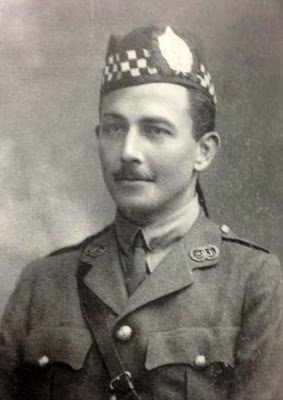 Hugh was born in 1889 in King’s Norton, Worcestershire, UK.

Educated at Shrewsbury School before going on to Corpus Christi College, Oxford, Hugh went to work for the Colonial Civil Service and was sent to Nigeria, where he became a District Officer.

In 1915, Hugh returned home and joined the Princess Louise’s (Argyll and Sutherland Highlanders), 4th Battalion and was commissioned as a 2nd Lieutenant.  At the time of his death at High Wood on 18th August 1916, he was a temporary Captain.

The poem shown was discovered in the diary of Captain Hugh Stewart Smith following his death.

On the plains of Picardy
Lay a soldier, dying
Gallantly, with soul still free
Spite the rough world’s trying.
Came the Angel who keeps guard
When the fight has drifted,
"What would you for your reward
When the clouds have lifted?"
Then the soldier through the mist
Heard the voice and rested
As a man who sees his home
When the hill is breasted –
This his answer and I vow
Nothing could be fitter –
Give me peace, a dog, a friend
And a glass of bitter!