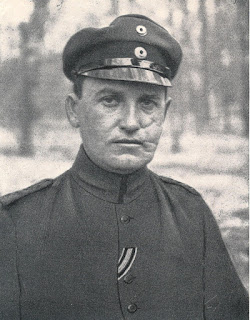 Gustav Sack was born on 28th October 1885 in Wesel, a city in North-Rhine Westphalia, near the border with Holland.   His father was a schoolmaster.  He was educated at the Grammar School in Wesel, where he became interested in English literature.  He went on to study at the universities of Greifswald, Műnster and Halle.


Sack married Paula Harbeck in 1914.  In Switzerland when war broke out, Sack returned to Germany and was called up as he was a Lieutenant in the Reserves.   He served on The Western Front on The Somme, which had a profound effect on him and during that time he wrote about the insanity of war.


Accused of misconduct and insubordination, Sack spent some time in a psychiatric hospital, after which he and his wife moved to Munich.  When he was passed as fit to return to military duties, Sack was sent to the Eastern Front in Romania in November 1916 where he was killed on 5th December 1916 at Finta Mare near Bucharest.

After the war, Sack's widow published some of his work under the title "Die Drei Reiter/Gesammelte Werken" in Berlin in 1920.

Gustav Sack is one of the poets featured in the Songs of the Somme Exhibition at The Wilfred Owen Story Museum in Argyle Street, Birkenhead, Wirral, UK.


Sack noticed the moon as he left his local one evening - looking like a paper lantern, shaped like a scythe, casting a shadow that looks like a cut in the lawn.  It would be interesting to find out where he found an English Garden, though we know from Anne Powell's book "Gardens Behind the Lines, 1914 - 1918 Gardens Found and Made on the Western and Eastern Fronts (Cecil Woolf, London, 2015) that there were many such gardens lovingly created in the desolation of the First World War.
Posted by Lucy at 03:57