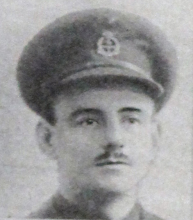 William was born in Bluevale, Huron County, Ontario, Canada on 8th July 1886, where his maternal grandparents lived..  His father was The Rev. Dr. Scanlan and his Great-Grandfather was Michael Scanlan, a High Sheriff of Limerick in Ireland.


When WW1 broke out, William was working as the City Editor of the newspaper “Regina Leader” in Saskatchewan, Canada.  He enlisted in September 1914, joined the Fifth Canadian Battalion of the First Canadian Division and was posted to the Western Front in France, probably travelling via Britain.


As well as having poems published in “Canada in Khaki”, William co-edited “A Christmas Garland from the Front: Fifth Canadian Battalion: First Canadian Division, BEF, France and Belgium, which was published by G. Pulman & Sons, London, 1915.   William was also involved in the Canadian Corps Entertainment Party from 1915 until 1916, entertaining the troops.  Awarded the Military Medal for conspicuous gallantry and promoted to the rank of Lieutenant, William was also awarded the Military Cross.


Wounded in the fighting on Vimy Ridge on 9th April 1917 and died the following day from his wounds.  He was buried in Barlin Communal Cemetery Extension, Pas-de-Calais, France.