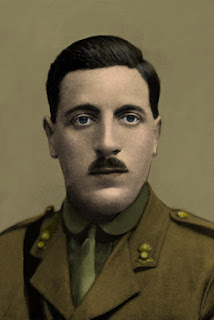 Born in Delhi, India on 20th October 1888, John Louis Crommelin-Brown was educated at Winchester College in Hampshire before going on to Trinity College, Cambridge.   While at Cambridge, he wrote lyrics for Footlights.

During the First World War John was commissioned as a Second Lieutenant in the Royal Garrison Artillery and became a Lieutenant in January 1916.

After the war, John taught at Repton School in Derbyshire and played professional cricket for Worcestershire.  He died at Minehead in Somerset on 11th September 1953.

John's WW1 poetry collection 'Dies Heroica War Poems 1914 - 1918"', published by Hodder and Stoughton, London in 1918, is available as a free down-load on Archive:https://archive.org/details/diesheroicawarpo00crom

With thanks to Michael Bully for finding this forgotten WW1 poet.  Michael has a weblog dedicated to the sea poetry of WW1 which you can see here http://greatwaratsea.blogspot.co.uk