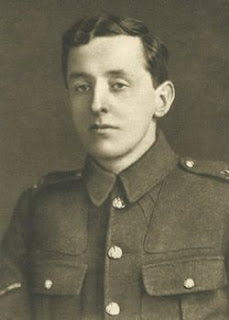 One of the poets included in the Somme Poets exhibition and book is John William Streets, who was known as Will.


When the First World War broke out, John William Streets joined the 12th York and Lancashire Regiment and attained the rank of Sergeant.


From the Western Front, Streets wrote to his publisher Galloway Kyle about his poems:


“They were inspired while I was in the trenches, where I have been so busy I have had little time to polish them. I have tried to picture some thoughts that pass through a man’s brain when he dies. I may not see the end of the poems, but I hope to live to do so. We soldiers have our views of life to express, though the boom of death is in our ears. We try to convey something of what we feel in this great conflict to those who think of us, and sometimes, alas! Mourn our loss.”


Streets' Battalion fought on the first day of the Somme - 1st July 1916. Streets was wounded and made his way back to the British lines for treatment. He was seen going to help another wounded man but he then disappeared.  His body lay in No Man's Land until 1917, when the fighting moved back across the area.  On 1st May 1917 the body of John William Streets was identified and he was officially recorded as “Killed”.   He was buried in Euston Road Cemetery at Colincamps on the Somme in France.  The village of Colincamps is about eleven miles north of Albert.
John William Streets’ poetry collection ‘Undying Splendour’ was published by Erskine Macdonald in 1917 and is available as a free download on Archive so that you can read his work: https://archive.org/stream/undyingsplendour00stre#page/n5/mode/2up

Streets’ poems were also included in nine First World War Poetry Anthologies.
Some of his poems were written while he was in training at Hurdcott Camp which was situated between Compton Chamberlayne and Fovant in Wiltshire, UK. http://www.fovanthistory.org/hospital.html

David Harrop read out one of Streets's poems at a Remembrance Service in Manchester on 13th November 2016.
Posted by Lucy at 01:52