Poets of 1918 and some of the WW1 artists - Latest Exhibition on display at The Wilfred Owen Story, Birekenhead, Wirral, UK 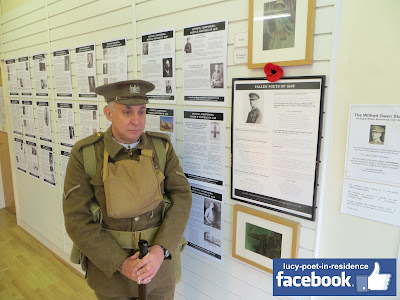 Panels from previous exhibitions held at the Wilfred Owen Story, including that featuring some of the poets involved in the Battles of Messines (Mesen), Passchendaele and after in 1917, Poets of the Battle of Arras in 1917, Poets of the Somme 1916, Female Poets of the First World War, Inspirational Women of World War One, Fascinating Facts of the Great War and the panels about some of the Poetry written by Schoolchildren during WW1, are available to view on file at The Wilfred Owen Story.

Here is a link to a news report about the opening of the exhibition of Poetry written by Schoolchildren during WW1 on 17th March 2018:  https://www.youtube.com/watch?v=78b40hAbqb8

Other exhibitions are planned. Exhibition panels are sent out free of charge by e-mail to any venue wishing to host an exhibition.   Details on request.