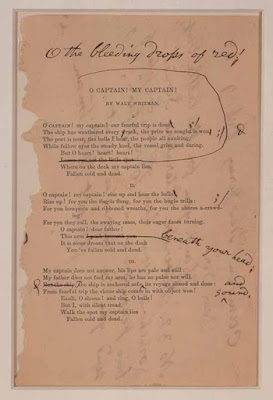 With thanks to Adrian for reminding me about the American poet Walt Whitman (1819 - 1892), whose poem "Reconciliation" inspired British composer Ralph Vaughan Williams to compose a cantata - a plea for peace - entitled "Dona nobis pacem" (Tr. Give us peace), which was first performed in 1936.  Whitman wrote:

Word over all, beautiful as the sky,
Beautiful that war and all its deeds of carnage must in
time be utterly lost,
That the hands of the sisters Death and Night
incessantly softly wash again, and ever again, this
soil'd world;
For my enemy is dead, a man divine as myself is dead,
I look where he lies white-faced and still in the coffin—
I draw near,
Bend down and touch lightly with my lips the white face
in the coffin.

Whitman's most famous poem is arguably "Oh Captain, my Captain".

Ralph Vaughan-Williams was too old for military service in 1914 but volunteered to serve nonetheless and joined the Royal Army Medical Corps (RAMC). He drove ambulances on the Western Front and in Greece during the First World War.

Although not a First World War poet, Whitman's poetry must surely have resonated with the soldier poets of WW1.
Posted by Lucy at 07:52