Found in an article sent to me by Historian Debbie Cameron. As Arthur is the

only VC poet of WW1 I have found so far, how come we have not heard of him previously? 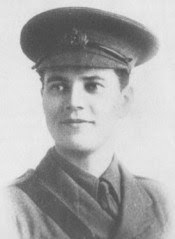 Arthur Walderne St. Clair Tisdall was born in Girgaum, Bombay, India, on 12th July 1890. His parents were Marian Louisa Tisdall, nee Gray, and her husband, The Reverend William St. Clair Tisdall, a Minister in the Anglican church.  By all accounts Arthur’s early life must have been interesting as he was born in India and his father, who was a linguist, historian and philologist, served as the Secretary of the Church of England's Missionary Society in Isfahan, Persia, where three of Arthur’s siblings were born.

Arthur's Father, The Rev. William St ClairTisdal, was fluent in several Middle Eastern languages, including Arabic, and spent much time researching the sources of Islam and the Qur'an in the original languages. He also wrote grammars for Persian, Hindustani, Punjabi and Gujarati.

Educated at Bedford School, Arthur went on to Trinity College, Cambridge where he gained a BA Double 1st Class Degree with Honours and was awarded the Chancellor's Gold Medal.

Arthur joined the Royal Naval Volunteer Reserve (RNVR) as a Sub Lieutenant and served in Anson Battalion.  The Battalion was involved in the Gallipoli Campaign and Arthur was awarded the Victoria Cross for his bravery on 25th April 1915.

The VC Citation reads:  “During the landing from the S.S. “River Clyde” at V Beach in the Gallipoli Peninsula on the 25th April, 1915, Sub-Lieutenant Tisdall, hearing wounded men on the beach calling for assistance, jumped into the water and, pushing a boat in front of him, went to their rescue. He was, however, obliged to obtain help, and took with him on two trips Leading Seaman Malia and on other trips Chief Petty Officer Perring and Leading Seamen Curtiss and Parkinson. In all Sub-Lieutenant Tisdall made four or five trips between the ship and the shore, and was thus responsible for rescuing several wounded men under heavy and accurate fire. Owing to the fact that Sub-Lieutenant Tisdall and the platoon under his orders were on detached service at the time, and that this Officer was killed in action on the 6th May, it has only now been possible to obtain complete information as to the individuals who took part in this gallant act. Of these, Leading Seaman Fred Curtiss, O.N. Dev 1899 has been missing since the 4th June, 1915.”

Arthur was killed in action some days later on V Beach, Sedd-el-Bahr, Gallipoli on 6th May 1915.  He has no known grave but is remembered on The Helles Memorial in Turkey -  Panel 8 to 16.

Arthur is also remembered on a wall plaque in the school chapel of Bedford Preparatory School in Bedfordshire.

Regarding Arthur’s poems, I found this reference about his time at university:

A. W. St. C. Tisdall, who has just fallen in the Dardanelles, was a frequent contributor to “The Cambridge Magazine” during 1912-13. He was an enthusiastic and conscientious member of the O.T.C., and during the Michaelmas Term, 1912, published, under the pseudonym C. Vilian Roberts, two forcible criticisms of the Corps which caused a great deal of excitement at the time. We feel sure the authorities had long forgiven his indiscretion.

He was also a staunch supporter of the C.I.C.C.U., and though he did not succeed in converting the staff to the tenets of that body, for a long time also contributed an account of their weekly sermon to our columns. But many of our readers will remember him chiefly for two little poems signed W.T., which we cannot forbear to quote.

Lady, your hands are white, so white and clean,

But I have looked and seen

The chapt and grimy hands that keep them so.

You do not know.

Your hands are white like Pilate’s, white and clean;

For others come in between

To shed the innocent blood that gemmed them so.

What did you know?

With your white hand, my lady, stop your ear,

Lest you ma chance to hear

Your reckless slaves that curse you in their woe.

Why should you know?

The second was inspired by the Balkan war, and entitled “Nick of Crnogora (vulgarly called Montenegro).”

Who batted first in this great war a-

Gainst the Turk and proved a scorer?

Who chased the Turkish carnivora

And made them wiser p’r’aps, if sorer?

Who now of liberty restorer

Reigns haloed in a golden aura?

Who, but King Nick of Crnagora?

And then, poor fellow, himself to be killed at the hands of the Turks! He was a careful and accurate scholar; Bell Scholar in 1909; Double First in the Classical Tripos and first Chancellor’s medallist: and we deplore in his loss not only the vivacious contributor, but, with all who knew him.

An article found by Debbie Cameron, which was writted by Dr. E.M. Purkes and publshed in the “Westminster Gazette” on 3rd November 1916 by

Photographs of Helles Memorial provided by Andrew Mackay and shared with his kind permission.