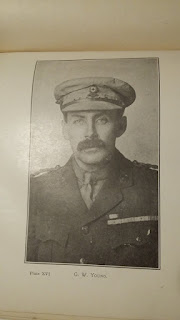 Educated at Marlborough, Geoffrey went on to study at Trinity College, Cambridge University, where he was awarded the Chancellor's Medal for English Verse, In I900 Geoffrey was appointed to a post of assistant master at Eton School. Five years later, he accepted a post as Inspector of Secondary Schools.

Geoffrey was 38 years old when the First World War began and, too old to enlist, he served first with the Friends' Ambulance Unit in Flanders, and later in command of the First British Ambulance for Italy. Mentioned in Despatches, awarded the Belgian Order of Leopold for exceptional courage and resource, and the Italian silver medal' for Valour', Geoffrey was badly wounded in 1917 and had to have his leg amputated above the knee.

“Bolts from the blues: rhymes, Gorizia, 1917”. Sketches by Sebastian B. Meyer and rhymes by Geoffrey Young serving with the first British ambulance unit of the Red Cross on the Italian Front.

“I hold the Heights” by Geoffrey Winthrop Young

I have not lost the magic of long days,

I live them, dream them still

Still I am a master of the starry ways,

And freeman of the hills;

Shattered my glass, ere half the sands had run.

Mine still the hope that haileth me from each height

Mine the unresting flame.

With dreams I charmed each doing to delight;

I charm my rest the same.

Severed my skin, ere half the strands were spun

What if I live no more those kingly days?

Their night sleeps with me still.

I dream my feet upon the starry ways;

My heart rests in the hill.

I may not grudge, the little left undone.

I hold the heights, I keep the dreams I won.

Grub for gold with prisoned life;

Mint it at the price of breath;

Let it bear the stamp of strife;

Let it purchase power of death:

Life and gold, one wasted bar,

Lavish it on waste of war.

Starve the growth, and hoard the spoil

Stored in trenches, heaped on waves:

Till the trump of Azrael sound.

Drain the gold, and forge the chain;

Drain the strength, and bind the race;

Rouse the brute in man to reign;

Train him for his princely place:

Flunkey to a nation’s pride

In the lust of fratricide.

Find my past, Free BMD