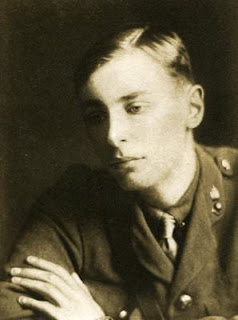 Ask anyone in the 21st Century who was THE soldier poet of the First World War and they will probably reply Wilfred Owen or Siegfried Sasoon, Robert Graves or perhaps Rupert Brooke but I doubt very much that they will reply ‘Robert Nichols’.  Yet Robert was the Soldier Poet of the War during the 1914 – 1919 period.

Robert Malise Bowyer Nichols was born on the Isle of Wight on 6th September 1893.  His parents were John Bowyer Buchanan Nichols and his wife, Catherine Louisa, nee Bouverie-Pusey.  Robert’s father was a member of the British aristocracy, descended from John Nichols the antiquarian, who was himself an artist, poet and writer.  The Nichols family had a house in Ealing, London and a country seat called Lawford Hall in Manningtree, Essex.  Robert had a younger brother Philip.

Robert was educated at Winchester School before going up to Trinity College, Oxford.   He joined the Royal Field Artillery during WW1 as a 2nd Lieutenant and saw service at the Battle of Loos and on The Somme.

Invalided home to Britain suffering from shell shock, Robert then went to work for the Ministry of Labour and the Ministry of Information.   He also gave public readings of his war poetry to large audiences in Britain and toured the United States of America giving poetry readings.

In 1917, Cecil Roberts, the writer, poet and First World War correspondent, met Robert Nichols in The Poetry Bookshop that opened in London in 1913 and was run by Harold Munro.   Cecil described Robert Nichols as "vivacious, good-looking, tall, slim and intense" and "much in demand in the West End of London" as "an emotional and  histrionic reader of his own verses".   The Poet Sir Edmund Gosse described Robert Nichols as "feline" and compared his work to that of Keats and Shelley, whereas Wilfred Owen apparently called him "self-centred and 'vaniteux'".

Robert married Norah Madeline Denny on 11th July 1922 at St. Martin-in-the-Fields, London.  He had his portrait painted by Rothenstein and Augustus John.

From 1921 until 1924, Robert lectured at the University of Tokyo in Japan and while there he translated Japanese poetry into English.  He moved to Hollywood in 1924, began writing plays for the film industry and was adviser to Douglas Fairbanks.  Robert returned to the UK in 1926.

Robert Nichols died in Cambridge in 1944 and was buried in Essex.

Robert’s WW1 poetry collections, some of which are available to read as downloads on Archive, were:

and his poems were featured in twenty-four First World War Poetry Anthologies.

‘Such was my singing:  a selection from poems written between the years 1915 and 1940’ which was published by Collins in 1942.
Sources:  Catherine W. Reilly “English Poetry of the First World War A Bibliography” (St. Martin’s Press, New York, 1978) and Cecil Roberts “The Years of Promise” (Hodder & Stoughton, London, 1968)

Cecil Roberts "The Years of Promise" published in 1968 by Hodder & Stoughton Ltd., London.
Poems by Robert Nichols
SONNET
Look up, O stricken eyes that long have pored
Over the sickliness of a young heart
Diseased with double doubt and the abhorred
Drugs of Self-will and Pity. Scan the chart
Of freedom in a new and noble cause.
The past is dead. A New Age now begins
Of noble servitude to nobler laws
Than those that barred by custom your lame sins.
All that is terrible is yours to face, —
You that once sought the dark noon of the storm
And only found a dust and a disgrace, —
Peril affronts you in heroic form :
Lift up your head. Prove that which was your boast
Though deemed long dead, — or be for ever lost !
Robert Nichols.
P 171 FROM THE FRONT : TRENCH POETRY
SELECTED BY  LIEUTENANT C. E. ANDREWS AVIATION SECTION, SIGNAi RESERVE CORPS
https://archive.org/stream/fromfronttrenchp00andr/fromfronttrenchp00andr_djvu.txt
Poems by Robert Nichols suggested by AC Benus, author of  “The Thousandth Regiment: A Translation of and Commentary on Hans Ehrenbaum-Degele’s War Poems” by AC Benus (AC Benus, San Francisco, 2020). Book details: ISBN: 978-1657220584 https://www.amazon.co.uk/dp/1657220583
IF it should hap I being summoned hence
To an unknown and all too hazardous bourne,
One should bring news charged with this heavy sense:
He has gone further and cannot return,
Waste not your hour in weary ' Why ? ' and ' Whence ? '
In grief that my young years be compted so.
I grieve not. Nor should you. My recompense
Grows with the years and with them yours shall grow.
For England's fairest, her best beloved lands,
Her watchful hills, her slumbrous trees and streams
Shall surely teach a heart, that understands,
What depth and amplitude of noble dreams
She gives and how content into her hands
I yield the little life without her seems.
And this poem, only a page after, is very progressive. It has some common themes with Hans Ehrenbaum-Degele.
THE CHINK
WEEPING, I listen and I wait,
The night grows long, the night grows late.
Still gird the guns. But now a pause
And lo ! a chink of night withdraws
And strange and distant, thin and high,
I hear the lost and human cry.
The victors and victorious slain,
The vanquished and their dead again
Sing : ' We have slain a Foeman tall,
Death the dreadest Foe of all.
For bound with our own bloodied bands
One is given in our hands,
And the steel that slit our side
Has his red hands crucified,
We have made a gain of loss,
Giant War hangs on his cross.
Nothing fair has man assayed
But by loss his gain was made.
Giant War is dead, but still
Live more giants that do ill.
Another poem:
BEGIN, O guns, your giant requiem
Over my lovely friend the Fiend has slain
From whom Death has not snatched the diadem
Promised by Poetry; for not in vain
Has he a greater glory now put on
Since, bound with cypress black, his boyish head
Shines on Death's crowded groves as none has shone
Since Sidney set a- whispering the dead.
Begin, O guns, and when ye have begun
Lift up your voices louder and proclaim
The sick moon set, arisen the strong sun,
Filling our skies with new and noble flame.
The Soldier and the Poet now are one
And the Heroic more than a mere name.
Posted by Lucy at 07:00