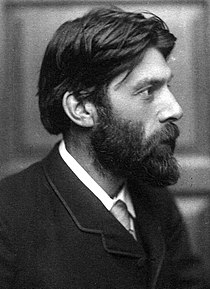 Educated at Eton College and Corpus Christi College, Oxford, where he became friends with the poet Gerard Manley Hopkins, Robert went on to study medicine at St Bartholomew's Hospital, London. His plan was to work as a doctor until he was forty and then retire to write poetry.  Robert worked at Bart’s Hospital before going on to work at the Great Northern Hospital.  He was also a doctor at the Hospital for Sick Children. Robert published his first collection of poetry in 1873.

Forced to retire in 1882 due to ill health, Robert was then able to fulfill his dream of becoming a full-time writer. In 1884 he married Monica Waterhouse, who was the daughter of the architect Alfred Waterhouse R.A.  The couple had two children – Elizabeth, who became a poet and wrote under her married name of Daryush, and Edward, who became a Cabinet Minister in the British Government.

Robert was elected to the Fellowship of the Royal College of Physicians of London in 1900. He was appointed Poet Laureate in 1913 – so far, the only medical graduate to have held the office.

During the First World War, Robert was one of the writers and poets invited to join the group of  poets and writers assembled by Charles Masterman as part of Britain's War Propaganda Bureau.

Among those who set some of Robert’s poems to music were Hubert Parry, Gustav Holst and later Gerald Finzi.

Unflinching hero, watchful to foresee
And face thy country's peril wheresoe'er,
Directing war and peace with equal care,
Till by long toil ennobled thou wert he
Whom England call'd and bade "Set my arm free
To obey my will and save my honour fair," --
What day the foe presumed on her despair
And she herself had trust in none but thee:

Among Herculean deeds the miracle
That mass'd the labour of ten years in one
Shall be thy monument. Thy work was done
Ere we could thank thee; and the high sea swell
Surgeth unheeding where thy proud ship fell
By the lone Orkneys, at the set of sun.