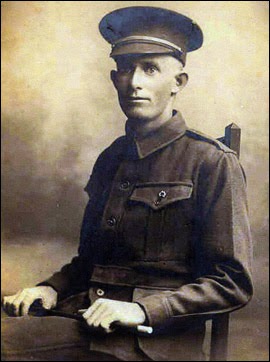 I have not been able to find out much about Leslie George Rub, other than that he was apparently born in Germany in around 1893.   His parents were Joseph and Kate Rub and they must have emigrated to Australia for they lived in Drayton, Queensland.  Leslie became a carpenter and he volunteered to join the Australian Army in the First World War.   He embarked for Europe in the HMAT "Wandilla" at Brisbane on 31st January 1916 and joined the 26th Infantry Battalion of the AEF as a Private.  He was soon promoted to the rank of Acting Corporal.   Leslie George Rub was wounded at Ypres in Flanders, Belgium and died of his wounds on 22nd September 1917. He is remembered at The Huts Cemetery Ypres, Belgium and in Australia.

The following poem "Christmas Day on the Somme" was written by George Leslie Rub.

’Twas Christmas Day on the Somme
The men stood on parade,
The snow laid six feet on the ground
Twas twenty in the shade.

Up spoke the Captain ‘gallant man’,
"Just hear what I’ve to say,
You may not have remembered that
Today is Christmas Day."

"The General has expressed a wish
This day may be observed,
Today you will only work eight hours,
A rest that’s well deserved.

I hope you’ll keep yourselves quite clean
And smart and spruce and nice,
The stream is frozen hard
But a pick will break the ice."

"All men will get two biscuits each,
I’m sure you’re tired of bread,
I’m sorry there’s no turkey
but there’s Bully Beef instead.

The puddings plum have not arrived
But they are on their way,
I’ll guarantee they’ll be in time
To eat next Christmas Day."

"You’re parcels would have been in time
But I regret to say
The vessel which conveyed them was
Torpedoed on the way.

The Quartermaster’s got your rum
But you may get some yet,
Each man will be presented with
A Woodbine Cigarette."

"The Huns have caught us in the rear
And painted France all red,
Pray do not let that trouble you,
Tomorrow you’ll be dead.

Now ere you go I wish you all
This season of good cheer,
A very happy Christmas and
A prosperous New Year."

With many thanks to Paulo Cabaço who first posted this poem in Remembering the First World War in 2014 One Hundred Years Facebook Group which is run by Stanley Kaye.