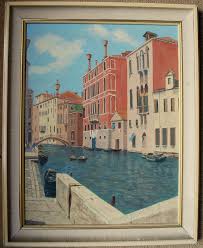 Edward Leslie Gunston was born on 22nd April 1895 in Camberwell, London, UK.  He was  the son of Wilfred's aunt - his Mother Susan's sister, Emma E., nee Shaw, from Oswestry, Shropshire - and her husband John Gunston, a pork butcher from Holborn, London.

Educated at Kings College, Wimbledon and Kendrick School, Reading, Leslie, like his now very famous cousin, also wrote poetry. The cousins found they had a lot in common as they were growing up and sharing holidays.  They also apparently had poetry writing competitions between themselves, challenging each other to write poems on a certain subject.  According to Dominic Hibberd, a poem by Leslie entitled "The End" was published in the YMCA magazine "YMCA Weekly" on 22nd December 1916 ("The Red Triangle" Number 102 Volume 2 p 1229).

Leslie trained as an architect and was also an extremely talented artist.  His work was regularly displayed at art exhibitions. The example of his work shown here is entitled "Venice".  Leslie married Norah Whitwell in 1925.

Leslie died in Hitchin, Hertfordshire on 24th March 1988, at the age of 92.   His WW1 poetry collection collection "The Nymph, and Other poems" was published by Stockwell in 1917. 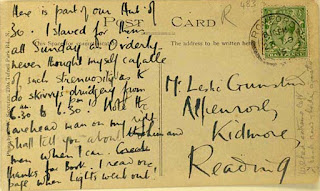 Postcard to Leslie from Wilfred of Hut 6a, Artists' Rifles at Hare Hall Camp, Gidea Park.