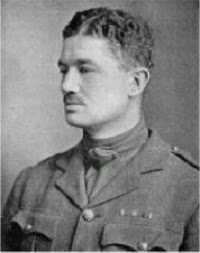 Yvon Davis you are amazing! Thank you so much. Yvon sends me information about forgotten poets of the First World War and has just found this link about Julian Grenfell "Via twitter @pgmhilferink: An Irishman’s Diary about war poet Julian Grenfell ‪#‎WW1‬http://t.co/AIdkGF1Lxp via @IrishTimes"

Julian Grenfell was born in London on 30th March in 1888.  He was named after his maternal Grandfather, Julian Fane, British Diplomat and poet who was a member of the Cambridge debating group "The Apostles".  Julian's parents were William Grenfell, who later became Baron Desborough, and his wife Ethel Priscilla Grenfell, nee Fane.  He was their eldest son  and was educated at Eton College and Balliol College, Oxford, where  he was a contemporary of Philip Sassoon, Siegfried's cousin.

Julian joined the Army in 1910 and at the outbreak of WW1 was in the Royal Dragoon Guards.  He was awarded the DSO in 1914 and was mentioned twice in Dispatches.

When Julian was wounded near the Ypres-Menin Road on 13th May 1915, he held the rank of Captain. He died of his wounds in hospital in Boulogne, France on 26th May 1915 and was buried in Boulogne Eastern Cemetery, Pas de Calais, France - Plot II, Row A, Grave 18.

Julian's most famous poem "Into Battle" was published in "The Times" newspaper of London the day following his death.

"Into Battle" was published as a one-off broadside for presentation to his mother by the Medici Society.   His poem was published in 34 WW1 anthologies and Julian Grenfell is one of the poets featured in Poets' Corner in Westminster Abbey, London.


The naked earth is warm with Spring,
And with green grass and bursting trees
Leans to the sun's gaze glorying,
And quivers in the sunny breeze;
And life is Colour and Warmth and Light,
And a striving evermore for these;
And he is dead who will not fight,
And who dies fighting has increase.

The fighting man shall from the sun
Take warmth, and life from glowing earth;
Speed with the light-foot winds to run
And with the trees to newer birth;
And find, when fighting shall be done,
Great rest, and fulness after dearth.

All the bright company of Heaven
Hold him in their bright comradeship,
The Dog star, and the Sisters Seven,
Orion's belt and sworded hip:

The woodland trees that stand together,
They stand to him each one a friend;
They gently speak in the windy weather;
They guide to valley and ridges end.

The kestrel hovering by day,
And the little owls that call by night,
Bid him be swift and keen as they,
As keen of ear, as swift of sight.

The blackbird sings to him: "Brother, brother,
If this be the last song you shall sing,
Sing well, for you may not sing another;
Brother, sing."

And when the burning moment breaks,
And all things else are out of mind,
And only joy of battle takes
Him by the throat and makes him blind,
Through joy and blindness he shall know,
Not caring much to know, that still
Nor lead nor steel shall reach him, so
That it be not the Destined Will.

The thundering line of battle stands,
And in the air Death moans and sings;
But Day shall clasp him with strong hands,
And Night shall fold him in soft wings.