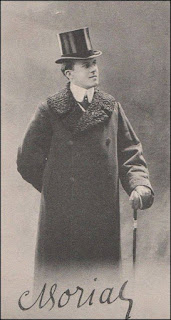 In commemoration of the Battle of Verdun, which raged from 21st February until 18th December 1916, here is a French soldier-poet-artist.  The French soldiers of the First World War are known affectionately as ‘Poilus’ (literally, the hairy ones), presumably because it was impossible to shave in the Trenches.   Verdun is a city on the River Meuse in Lorraine in the north east of France.


André Soriac was a French soldier poet artist (‘Poilu’) who was fifty when he volunteered in 1914.  He joined the 277th Regiment of the French Infantry and served in Lorraine in France.  He took part in the Battle of Verdun and was wounded three times before being invalided out of the Army in 1916.


The French soldiers of the First World War were known affectionately as ‘Poilus’ (literally, the hairy ones), presumably because it was impossible to shave in the Trenches.   Verdun is a city on the River Meuse in Lorraine in the north east of France.

Below is one of Soriac's poems which I have translated very roughly for those of you who do not understand French.  As far as I have been able to ascertain, Diane Degaby was a musical hall artist.


Dedicated to The Beautiful Diane Degaby, Benefactrice and friend of all the artist-poilus, with great affection.


The storm has passed and the Poilus rush
Heedless of the shells, shovels at the ready,
Leaping from their shelter in a shell hole
Gathering up  the spent, white, German metal.


Then, it’s action stations in a corner of the Trench …
A workshop with a few scant tools, a file, a hammer to hand,
Polishing night and day these machine-turned rings.
Yesterday an instrument of death, today … a humble gold band.


The ring is ready and tomorrow, dear Mothers,
Wives, little sisters, these jewels of the frontiers
Will shine – your most valued jewels – on your fingers.
For you will know just many countless moments of sorrow
Of care and danger your dear soldier artists
Have been through to make that ring … in the depths of their Trenches.


Number 28 in a series of illustrated poem cards of the Great War,