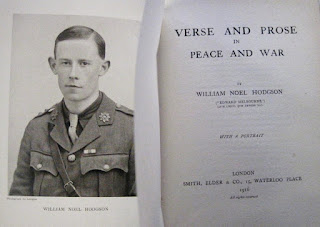 William was born on 3rd January 1893 in Thornbury, near Bristol.  His father, Henry B. Hodgson, was an Anglican Bishop.  The family moved to Berwick-on-Tweed.

William was educated at Durham School and went on to study at university.  He volunteered to join the Army and was commissioned into the 9th Battalion The Devonshire Regiment.   The Regiment was sent to Festubert in France in July 1915.   William was Mentioned in Despatches and awarded a Military Cross at the Battle of Loos.  Promoted to the rank of Lieutenant, William was posted to Fricourt on the Western Front in February 1916.   He was sent to Mametz in April 1916 and was killed in action on 1st July 1916 while attacking a German Trench.   William is buried in the Devonshire Cemetery in Mansell Copse.

William's WW1 collection "Verse and Prose in Peace and War" was published by Murray, London in 1917.  His poems were also featured in 20 WW1 poetry anthologies.
Posted by Lucy at 12:17