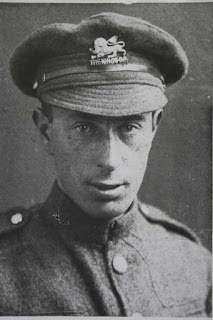 Isaac Rosenberg was born in Bristol, the second of six children.  His twin brother died at birth. His parents were Barnett and Hacka (Anna) Rosenberg from Lithuania.  The family moved to Stephney in East London in 1897.   Isaac attended St. Paul’s Primary School and Baker Street Board School.   Showing an aptitude for poetry and art, in 1902 he was allowed to take lessons at the Arts and Crafts School in Stepney.


In June 1914, suffering from chronic Bronchitis, Isaac Rosenberg went to live with his sister Mina who was married and living in Capetown, South Africa.   He wrote a poem called ‘On Receiving News of the War’.  On his return to the UK, Isaac enlisted in the 12th Bantam Battalion of the Suffolk Regiment.  The Bantam Regiments were set up to allow men of less than the British Army’s regulation 5’ 3” height to enlist.   He transferred to the South Lancashire Regiment then the King’s Own Royal Regiment and was sent to France in June 1916.


Isaac had never enjoyed robust health and he fell ill in January 1917.  On his return to the Western Front, Isaac was transferred to the 40th Division Works Battalion.   But returning to his own Regiment he fell ill again and was treated in the 51st General Hospital in Etaples, France.  Isaac was killed at Fampoux, north of Arras in France on 1st April 1918 (Nisan 19, 5678 in the Jewish Calendar).   He is buried in Bailleul Road East Cemetery in Saint-Laurent-Blangny, in the Nord Pas de Calais area of France.


A talented artist, Isaac’s self-portraits now hang in the National Portrait Gallery and Tate Britain.  He was commemorated on 11th November 1985 in Westminster Abbey Poets Corner.


Isaac’s WW1 poetry collections were published after his death:


‘Collected Works: Poetry, Prose, Letters, and some Drawings’ edited by Gordon Bottomley and Denys Harding, with a foreword by Siegfried Sassoon (Chatto & Windus, 1937)


‘Poems’ selected by Gordon Bottemley with an introductory memoir by Laurence Binyon (Heinemann, 1922)


His poems were also featured in eleven WW1 poetry Anthologies as well as being published in the press during WW1.

The Jewish East End Celebration Society are organising a statue in memory of Isaac Rosenberg to be placed in the grounds of Birkbeck College, London: