Review: “Poets & Pals of Picardy - A Weekend on The Somme” by Mary Ellen Freeman, Edited by Ted Smith, published by Pen & Sword, Barnsley, 1999 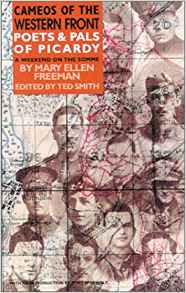 Having been researching the poetry of the First World War for the past six years, I was very pleased to discover quite a few poets in this book that I had not previously heard of. Primary schoolteacher/musician Mary Ellen has written a detailed account of a pilgrimage she made one weekend to battlegrounds and cemeteries of The Somme in France in 1982.  Mary Ellen’s Grandfather was with the Royal Field Artillery during the First World War – as was my Grandfather.  But this book is not just about some of the poets involved in the Somme Offensive, also included are stories about and by the soldiers who fell and extracts from prose written by those who were there.  I also discovered a WW1 artist I had not yet come across.

The book follows Mary Ellen’s emotional journey to the Western Front in France from Albert to The Ancre, setting the scene for her pilgrimage from the very first page, where her journey begins in Dover.  Throughout, Mary Ellen includes short quotations from some of her all-time favourite poems, as well as poems written at the time of the conflict.  The style of the book has the feel of a conversation with an old friend, as Mary Ellen shares her innermost thoughts and feeelings with the reader.  Eighteen poems in their entirety (including one by WW1 Female Poet/VAD nurse Vera Britain) are included at the back and the book also has an interesting bibliography and an in-depth index.

With photographs, maps and poems, this is definitely a book you will want to take with you if you are planning a visit to the cemeteries of the Western Front. It is beautifully written and easy to read and full of interesting anecdotes, as well as extracts from poems.

In his Note on pages xi – xii, the book’s Editor, the late Ted Smith, raises a very interesting question – “Why poetry?”  I think the answer lies in the fact that there were relatively few distractions in the early part of the 20th Century.  There were no computers, and of course, no Internet, no radio or television broadcasts and most people did not have telephones in their homes.  Magazines and newspapers such as “The Daily Mail”, to which the poet Jessie Pope was a regular contributor, published poems on a regular basis. We know that newspapers and magazines were made available to those at the Front.  Poetry was taught in schools and people learnt poems too – my Mother, who was born in 1910, often used to quote from poems she learnt at primary school.  People copied out poems into exercise books – I have seen quite a few notebooks like that – and they read or recited poems at family gatherings.

In London, The Times newspaper “estimated that it received around a hundred poems a day in August 1914, the vast majority in patriotic/romantic vein. According to one estimate, no fewer than 50,000 war poems were written in Germany every day in the same month. A bibliography of British war poetry, nearly all of it patriotic, lists over 3,000 volumes…” From Niall Ferguson "The Pity of War," p. 229 (Basic Books, 1998).

Here is another example of the popularity of poetry at the time of WW1 - on Friday, 12th June 1914, poet, writer and journalist Cecil Roberts, who worked for the “Liverpool Post” during WW1, hired the Bechstein Hall in Wigmore Street, London W1 for an evening reciting poems he had written.  Tickets were on sale from ten shillings and sixpence (which represents the buying power of about £115 in today’s money) down to two shillings (about £20 today), and the event was a sell-out and a great success.  Like the British Royal Family, the Bechstein Hall had a name change during the First World War and it became the Wigmore Hall.

For further information about “Poets and Pals of Picardy” and other wonderful books, please see the Pen & Sword website: https://www.pen-and-sword.co.uk/