With thanks to Sue Robinson of the Group Wenches in Trenches

for telling us about this poet 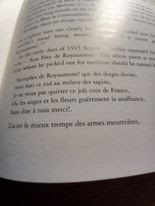 The best-tempered steel of deadly weapons,

Is transformed in your hands into humanitarian tears,

Are thrust into the palpitating body without fear,

While in a dream Miss Ivens, Miss Heyworth,

Under the confident spell that your science inspires,

I see you on waking searching for that smile,

Comforting balm on the bleeding wounds

The poem was written by Auguste Marius Treilles, a Sergeant in the French Army who was treated at the Scottish Women’s Hospital in Royaumont Abbey, France. It praised and was dedicated to the doctors, nurses and staff of the hosopital and was entitled ‘Au Fées du Royaumont’. The poem was published in a special SWH edition of “Common Cause”.-  "Common Cause", VII.344 (12 November 1915), p. 397. 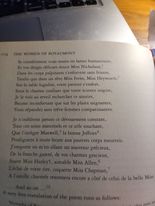 Royaumont Abbey is a former Cistercian abbey, located in France near Asnières-sur-Oise in the Val-d'Oise, approximately 30 km north of Paris. From January 1915 to March 1919 the Abbey housed a voluntary hospital – L’Hôpital Auxiliaire 301 – which was operated by The Scottish Women's Hospitals(SWH), under the direction of the French Red Cross.  The hospital was especially noted for its performance treating soldiers involved in the Battle of the Somme. After the war the Chief Medical Officer, Dr. Frances Ivens CBE MS(Lond) ChM(Liverp) FRGOG (1870–1944), was awarded membership of the French Légion d'honneur.

"The Common Cause" was a weekly publication, founded in 1909, that supported the National Union of Women's Suffrage Societies. The first issue was published on 15 April 1909 and the magazine was mainly financed by Margaret Ashton. The final issue was published on Friday, 30 January 1920, in which the successor magazine – “The Woman's Leader” was announced.

Norah Neilson Gray (16 June 1882 – 27 May 1931) was a Scottish artist of the Glasgow School. She was a member of The Glasgow Girls whose paintings were exhibited in Kirkcudbright in July and August 2010.  During the First World War, Norah volunteered to serve with the Scottish Women's Hospitals and was sent to France.   She managed to find time to paint and sketch. Nora offered a painting entitled “Hôpital Auxilaire 1918” showing the SWH Hospital in Royaumont Abbey to the Imperial War Museum but the Women's Work Sub-committee of the Museum refused to accept it and requested a painting showing a woman doctor instead.  Thea bove painting was accepted by the IWM in 1920

“The Women of Royaumont: Scottish Women's Hospital on the Western Front” by Eileen Crofton (Tuckwell Press, 1997)