Ernest Denny was born on 11th July 1888 in Rillington, Yorkshire, UK. He was the second son of Robert William Denny, a schoolteacher, and his wife, Ellen Hannah Denny, nee Gardner, and his siblings were Charles William Denny, Percy Gardner Denny and John Gardner Denny. By 1901 the family were living in Redditch, Worcestershire, UK, where Ernest’s father was the headmaster of a Wesleyan School.

In 1911 Ernest became ill and was admitted to a sanatorium in Lowestoft, Suffolk.

Ernest was educated at King Edwards School in Birmingham before going on to study at Reading University from 1913-15. On graduating he became a teacher and taught in a school in Suffolk.

During the First World War, Ernest seems to have joined the Artists Rifles as a Private before being commissioned as a Second Lieutent into the London Regiment and serving with the 15th (County of London) Battalion (Prince of Wales's Own Civil Service Rifles)  on the Western Front.

Ernest Denny is also rememberd on Redditch War Memorial and on a memorial in Redditch Bates Hill Methodist Church, which is now in Redditch Emmanuel Church 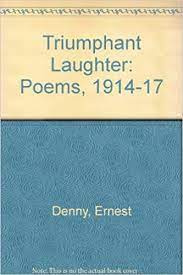 According to various websites, Ernest had poems published in an anthology entitled “Galleys Laden: Poems by Four Writers - Ernest Denny, Nora O'Sullivan, C. Doyle, and Gwen Upcott” ("Adventurers All" Series, No. XXIII), and a collection of his own poems entitled “Triumphant Laughter: Poems 1914 – 1917” was published in paperback form in 1978 by Brentham Press, London.

Thou hangest in carven agony;

Meek, yet superbly proud, Thou challengest me

To see Thee at Thy penance for no sin.

Thee dying, and the busy world around

A moment and pass by.

And Thou, uplifted high

In wooden imagery to plead Thy cause

Criest aloud, with lips that make no sound.

The poem is on page 14 of “Triumphant Laughter”which was found for us by Jeremy Jones, a research volunteer at Reading University Museum of English Rural Life / Special Collections Service.

Jeremy tells us: “In 2017 the university received a donation of material relating to Ernest, which contained some of his poems in manuscript form. Ernest is described on the photograph of his grave on the Commonwealth War Graves Commission website as "one of the war poets". Subsequent to his death, Ernest’s work was published In 'Galleys Laden' (1918) and 'Triumphant Laughter' (1978).”

* Historian Debbie Cameron is the founder of the Facebook Group Remembering British Women in WW1 – The Home Front and Overseas  https://www.facebook.com/groups/1468972083412699/