With thanks to Barry Van-Asten for suggesting I research Raymond. If anyone has any further information about Raymond Heywood please get in touch.

In spite of extensive research, I have not been able to find out much about Raymond – other than that he apparently served as a Lieutenant with the 10th (Service) Devonshire Regiment during WW1 and published two collections of his poetry during that time.

Following Barry’s comment that Raymond “may have served with 10th Service battalion, as he was in Macedonia (Salonika) after France (Neuve Chapelle, Givenchy) and possibly at Ypres (according to poem date/location)”, I contacted the Salonika Campaign Society about Heywood and received this reply: “According to the WW1 war diaries of the Devons, there is one entry relating to 2/Lt Heywood who joined the Battalion and was posted to A Company on Sunday, 1st October 1916.”

I did a little more research and found :

In July 1916, after some months spent on garrison duties, the 10th Devons arrived in the front line near Doiran close to the Bulgarian position at Petit Couronne.  Here in August the Bulgarians attacked but were repulsed by A Company, whose rapid fire inflicted heavy casualties.  By the end of September nearly a third of the 10th had been admitted to hospital suffering from malaria or dysentery.  Nonetheless, the Battalion remained in these positions for several months, patrolling and occasionally skirmishing with their opponents.

“The Devon & Exeter Gazette” carried an advertisement for “Roses, Pearls and Tears” on Saturday, 8th February 1919

Letters of Eve in The “Tatler” of 17th July 1918 tells us that Raymond donated “… half the proceeds of the sales of “Roses Pearls and Tears” to the poorer women folk-left by the men of his company who have fallen.”  Eve quotes from a letter sent to her by Raymond with a copy of his collection “with the author’s grateful t hanks for happy hourss spent reading “The Letters””:  “You know,  Eve, how splendid these boys were, meeting death with laughter  on their lips and the love of home in their hearts.”

'The Greater Love: Poems of Remembrance'  (Elkin Mathews,1919).  The Imperial War Museum in London apparently have a copy of this collection, autographed by the author https://www.iwm.org.uk/collections/item/object/1500063374

The “Exeter & Plymouth Gazette” of 31st May 1919 refer to Raymond as a Captain.  However, in a letter written by Raymond Heywood and published in the “Exeter & Plymouth Gazette” of 20 September 1919, he tells us that he was a Lieutenant and gives his address at that time as 10 Buckingham-street, Adelphi, London, WC2 – though that may be the address of the charity.   Raymond says:  “Sir, Under the patronage of Princess Christian, Veterans Day is to be held on the last day of this month.  The object is to create an Imperial memorial scheme to our war heroes.  It is to take the form of a Club house, with 1,000 beds and every convenience for serving and ex-Servicemen, also convalescent homes for those still requiring treatment and after-care. In order to help this scheme, I am publishing a special edition of Remembrance Poems entitled “The Great free for 2s. 6d. net to any address and the  help of your readers will be greatly appreciated.  Yours Truly, RAYMOND HEYWOOD, Lieut. Devonshire Regiment.

Here is one of Raymond's poems:

Peace is here! The bells are ringing

Through this land of ours today,

While a nations’s voice is singing

From a heart both glad and gay;

Through a miriad streets are blending

Peace is here!  the night of sorrow

Is forgotten with our tears,

There is laughter for tomorrow –

Joy for all these latter years;

Banish thoughts of care and sadness

Cast away each passing fear

There is only room for gladness . . .

Out in Flanders, out in France

Where the sunbeams softly dance

On each lowly hero bed;

Roses bloom where they are sleeping,

Birds are singing in the air;

Safe are they within God’s keeping . . .

Peace sweet peace is there! 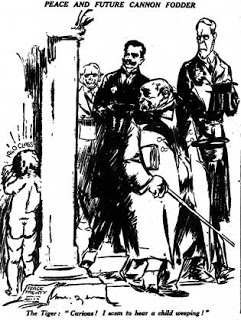 As his political cartoon demonstrates, Australian soldier poet and artist Will Dyson (1880 – 1938) was not so sure...