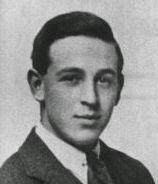 Clive Staples Lewis was born in Belfast on 29th November 1898.   His father was Albert James Lewis, a solicitor from Wales and his mother was Florence Augusta nee Hamilton whose father was a Church of Ireland priest.

As a child, Lewis gave himself the name of "Jack" by which he was known to family and friends.  Initially educated at home where he developed his love of literature, Lewis was sent to Wynyard School in Watford in England in 1908.  When the school closed down, Lewis went to a school nearer to home - Campbell College, Belfast.  Health problems meant he was sent to Malvern where he went to Cherbourg House school.

In 1916 Lewis gained a scholarship to University College, Oxford. In 1917, he was commissioned into the Somerset Light Infantry and saw action in the trenches on the Somme.  Lewis was wounded in April 1918 and sent back to England to recover.  After that he was assigned to duties in Andover before being demobilised in December 1918 and resuming his studies at Oxford, gaining a first class honours degree.

J.R.R. Tolkien was one of Lewis's friends at Oxford.  In 1956, Lewis married the American writer Joy Davidman.

After a long and illustrious career as a novelist, poet, academic, critic and essayist, Lewis died on 22nd November 1963.  Among his many novels, he is perhaps best remembered for "The Chronicles of Narnia."
It is interesting to note that C.S. Lewis, J.R.R. Tolien and A.A. Milne all wrote stories for children following their wartime service in the Army.
According to Catherine W. Reilly, Clive used the pen-name of Clive Hamilton.  His WW1 collection "Spirits in bondage: a cycle of lyrics" by Clive Hamilton, was published by Heinemann, London in 1919.
“ Death in Battle”
Open the gates for me,
Open the gates of the peaceful castle, rosy in the West,
In the sweet dim Isle of Apples over the wide sea’s breast,
Open the gates for me!
Sorely pressed have I been
And driven and hurt beyond bearing this summer day,
But the heat and the pain together suddenly fall away,
All’s cool and green.
But a moment agone,
Among men cursing in fight and toiling, blinded I fought,
But the labour passed on a sudden even as a passing thought,
And now—alone!
Ah, to be ever alone,
In flowery valleys among the mountains and silent wastes untrod,
In the dewy upland places, in the garden of God,
This would atone!
I shall not see
The brutal, crowded faces around me, that in their toil have grown
Into the faces of devils—yea, even as my own—
When I find thee,
O Country of Dreams!
Beyond the tide of the ocean, hidden and sunk away,
Out of the sound of battles, near to the end of day,
Full of dim woods and streams.
"Spirits in Bondage: a cycle of lyrics" is available as a download from Project Gutenberg:
https://www.gutenberg.org/files/2003/2003-h/2003-h.htm
Other Sources:  Wikipedia   Photo:  Google Images,
Catherine Wl. Reilly "English Poetry of the First World War: A Bibliography" (St. Martin's Press, New York, 1978) p. 200. and
https://www.poeticous.com/c-s-lewis/the-autumn-morning
Posted by Lucy at 02:40