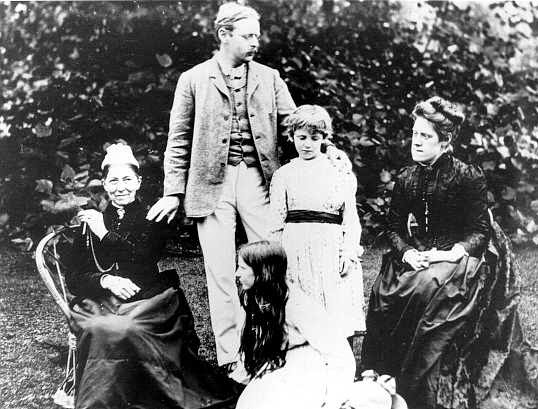 Edmund William Gosse was born in Hackney in London on 21st September 1849.  His parents were Philip Henry Gosse, the famous naturalist and Emily Gosse nee Bowes a poet and artist.

Edmund’s parents were members of the Plymouth Bretheren, a Protestant sect.   After the death of Emily Gosse in February 1857, Edmund and his father went to live in Devon.  Edmund was sent to boarding school where he became interested in literature.

In 1860 Edmund’s father re-married. His wife was Eliza Brightwen who was also very religious.   Eliza’s brother George was married to Eliza Elder Brightwen a naturalist and writer.

Edmund’s first employment was as an assistant librarian at the British Museum. Charles Kingsley, the writer (“The Water Babies”) from Devon, helped to get the position for Edmund.

In 1873, Edmund published his first collection of poems “On Viol and Flute”.  One of his childhood friends was Robert Louis Stevenson and he was also friends with Alfred, Lord Tennyson, Robert Browning, Charles Swinburne, Thomas Hardy and Henry James.

In 1875, Edmund took up a post as translator at the Board of Trade in London, which gave him time to write and a salary.  The same year, Edmund married Ellen Epps an artist in the Pre-Rephaelite Group whose father was George Napoleon Epps, a Homeopath.   They had three children – Emily Teresa, Philip Henry George and Laura Sylvia.   Laura became a painter and Philip Gosse became a doctor.

From 1884 to 1890 Edmund lectured about English Literature at Trinity College, Cambridge, who bestowed an honorary MA on him in 1886.    In 1884 Edmund toured America lecturing.  During the 1880s he was one of the most prominent critics on the subject of sculpture and was a regular contributor to “The Saturday Review”.

From 1904 until his retirement in 1913, Edmund was the librarian at the House of Lords Library.  Edmund’s most famous book is “Father and Son” which deals with his relationship with his father.