Edward Irving Murray McClymont was born on 23rd September 1889 In Kirkudbright, Scotland.  His parents were James and Margaret McClymont.  Murray was registered on the 1911 Census as living in Tongland Road, Tranmere, Birkenhead, Wirral and in 1913, he married Jessie T. Fraser (b. 23 March 1885).

During the First World War, Murray served as a 2nd Lieutenant in the 2/10th (Scottish) King’s Liverpool Regiment.  On 7th September 1918 Wilfred Owen met "Scottish poet Murray McClymont" when they were both in France.  Wilfred  "discovered near by last night one of Erskine Macdonald’s little Georgian Poets. He is, really, a big Scotchman, of no genius, but useful as an audience." 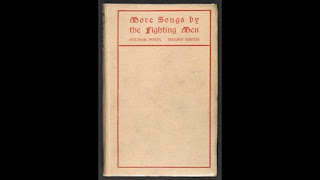 Murray presented Wilfred with a copy of the book in which a few of his poems were published  – “More Songs by the Fighting Men” – and inscribed it thus:

‘A little book and a little song,
The first all right and the last all wrong;
Which is but meet, let it be known,
Since mine’s the song, and the book’s for Owen!’

In 1922 Murray graduated from University College, London with a Diploma in Journalism.

Murray then went on to become a successful playwright.  Someone serching for information about him via the Internet said: "He is very obscure. He served as an officer with the Liverpool Scottish Regiment and made a successful debut as a playwright at the Birmingham Repertory Theatre in 1927 when on 26th  February 1927, his play “The Mannoch Family”, a comedy about the age-old struggle between the values of youth and the older generation, was performed for the first time at the Birmingham Repertory Theatre. A young actor called Laurence Olivier starred in that production, which was, by all accounts, a great success.”

In the 1939 Census, Mr and Mrs McClymont lived at 33 Tettenhall Road, Wolverhampton C.B., Staffordshire, England and Murray described himself as a Dramatist.  Murray died in Wales in 1976.

Dedicated to my "skipper," Captain Alan Cookson (killed in action 27th June, 1917), who now sleeps eternally in the shadow of the little grey church at . . .

WHEN sands of Time have run their course
And mortal heart is stilled,
We render back unto its Source
The dust that He fulfilled;

And in some still, subduéd spot
Where all is peace, and they
Who walk the silent paths are taught
To meditate and pray,

We to that dust its rest afford
And dry our idle tears:
For Death is peace, and Peace adored
Reigns here throughout the years.