With thanks to Historian Debbie Cameron for finding the poem "Riches", published in "The Landswoman" in August 1918, thus reminding me that I had not yet researched this WW1 poet. 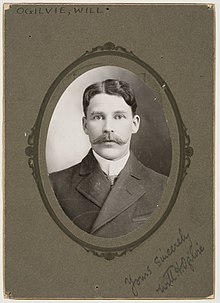 Educated at Kelso High School for two terms as a weekly boarder, Ogilvie then had some tutoring in Yorkshire, before entering Fettes College, Edinburgh where he excelled as a runner and in rugby.

Ogilvie travelled to Australia, arriving in Sydney on 1st  November 1889. During his time in Australia he worked on sheep stations in north-western New South Wales, south-eastern South Australia, and central New South Wales, where he was a proficient horseman, and gained the reputation as one of Australia's top bush poets.  He returned to Britain in 1901 and became a freelance journalist. From 1905 to 1908, he held the position of Professor of Agricultural Journalism at the Iowa State College, United States of America

During the First World War, Ogilvie remained in Great Britain, and was in charge of the Army Remount Depot in Wiltshire that prepared Canadian horses for military service.  Fellow Australian poet A. B. 'Banjo' Paterson was placed with the Australian Remount Service in 1915, rising to become its officer in charge in Cairo, Egypt.

In 1918, Ogilvie first leased then bought the Presbyterian church manse 'Kirklea' at Ashkirk, Selkirkshire, Scotland. At the start of the Second World War, Ogilvie, aged 71, undertook ARP warden duties in Selkirk. He continued to live in Kirklea until his death at 93 years of age in 1963, followed by his wife Madge in 1965. His ashes were scattered on the hill road to Roberton, Scotland, along with Australian wattle leaves.

Will Ogilvie’s WW1 poetry collection “Galloping Shoes: Verses” was published by Lionel Edwards in 1922 and his poems featured in eleven WW1 poetry anthologies. 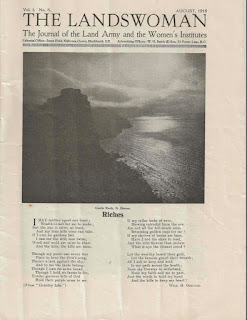 “The Offside Leader” by William Henry Ogilvie
This is the wish, as he told it to me, Of Driver Macpherson of Battery B. I WANT no praise, nor ribbons to wear ; I 've done my bit, and I 've had my share Of filth and fighting and blood and tears And doubt and death in the last four years. My team and I were among the first Contemptible few when the war-clouds burst. We sweated our gun through the dust and heat, We hauled her back in the Big Retreat, With weary horses and short of shell, Turning our backs on them. That was Hell. That was at Mons ; but we came back there, With shine on the horses and shells to spare ! And much I've suffered and much I've seen From Mons to Mons on the miles between, But I want no praise, nor ribbons to wear — All I ask for my fighting share Is this : that England will give to me My offside leader in Battery B. She was a round-ribbed blaze-faced brown, Shy as a country girl in town, Scared of the gangway and scared of the quay, Lathered in sweat at a sight of the sea, But brave as a lion and strong as a bull, With the mud at the hub in an uphill pull. She learned her job as the best ones do. And we hadn't been over a week or two Before she would stand like a rooted oak While the bullets whined and the shrapnel Broke, And a mile of the ridges rocked in glee. As the shells went over from Battery B. One by one our team went down, But the gods were good to the blaze-faced Brown. We swayed with the battles back and forth. Lugging the limbers south and north. Round us the world was red with flame As we gained or gave in the changing game ; Forward or backward, losses or gains, There were empty saddles and idle chains. For Death took some on the galloping track And beckoned some from the bivouac ; Till at last were left but my mare and me Of all that went over with Battery B. My mates have gone and left me alone ; Their horses are heaps of ashes and bone. Of all that went out in courage and speed There is left but the little brown mare in the lead, The little brown mare with the blaze on her face That would die of shame at a slack in her trace, That would swing the team to the least command, That would charge a house at the slap of my hand, That would turn from a shell to nuzzle my knee — The pride and the wonder of Battery B. I look for no praise and no ribbons to wear. If I 've done my bit it was only my share. For a man has his pride and the strength of his Cause And the love of his home — they are unwritten laws. But what of the horses that served at our side. That in faith as of children fought with us and died ? If I, through it all, have been true to my task, I ask for no honours. This only I ask : The gift of one gunner. I know of a place Where I’d leave a brown mare with a blaze on her Face, 'Mid low leafy lime-trees in cock's-foot and clover To dream, with the dragon-flies glistening over.
Sources: Catherine W. Reilly “English Poetry of the First World War: A Bibliography” (St. Martin’s Press, New York, 1978) p. 241
https://allpoetry.com/William-Henry-Ogilvie
https://en.wikipedia.org/wiki/William_Henry_Ogilvie