"The Hun Hunters Cautionary Tales from The Trenches Cartoons and rhymes" Published by Grant Richards, London. (1916) 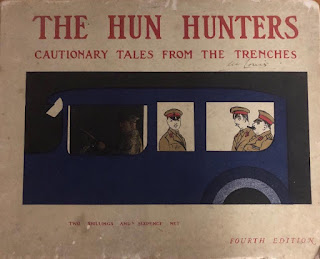 From Alex Mayhew via Twitter @AlexCMayhew :
“I was recently given this #FWW book. It uses verse to describe the front and poke fun at characters such as staff officers + old generals. I had never heard of it but it was popular enough to have 4 print runs between August + November 1916.

Has anybody come across it before?”

"The Hun Hunters. Cautionary Tales from the Trenches" (Grant Richards, 1916)

Featuring 'Sergeant Tombs, whose Passion for Experiment led him to Destruction'. A wonderful example of sardonic 'Tommy' humour from the trenches, somewhere between Belloc's 'Cautionary Tales' and Graham's 'Ruthless Rhymes'.

There don't appear to be any clues as to who wrote and/or put this book together.  Here is a sample poem: 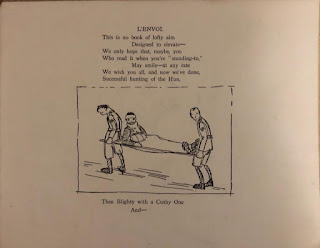 An Envoi or envoy in poetry is used to describe: a short stanza at the end of a poem such as ballad, used either to address an imagined or actual person or to comment on the preceding body of the poem.

If anyone can throw any light on this please get in touch.