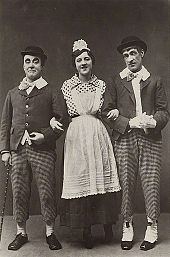 George Robey was an English comedian, singer and actor in musical theatre and music hall - I had heard of him but never knew he wrote poems.

During the First World War, in addition to his performances in revues, George raised money for many war charities and was appointed a CBE in 1919.  He became famous in musical revues during and after the First World War, particularly with the song "If you were the only Girl in the World”.  The song, popular during WW1, was composed by Nat D. Ayer with lyrics by Clifford Grey specially for the musical revue “The Bing Boys Are Here”, which premièred on 19 April 1916 at the Alhambra Theatre in Leicester Square, London. The song was originally performed as a duet between Lucius Bing, played by George Robey, and his love interest, Emma, played by Violet Loraine and was published in 1916 by B. Feldman & Co. and republished in 1946. In the early months of 1954, a knighthood was conferred on Robey by Queen Elizabeth The Queen Mother.  He died on 29th November 1954.

This poem, entitled, 'A Tommy's Appreciation of Victoria Station Free Buffet' and written by George Robey, set the scene in Victoria Station, London, UK where weary Tommies arrived after a long journey.  Staffed mainly by middle and upper class women, the WW1 buffets in stations were a war charity close to the heart of high society magazines such as “The Tatler”.  Money also came from theatrical fundraisers such as George Robey, who adopted the buffet as one of his charities putting on matinee variety performances at the Coliseum, generously donated by the theatre impresario Oswald Stoll for the afternoon. 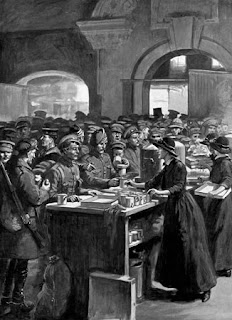 ''Ave you ever struck London at two in the morn?

When you're dying for something to drink as is warm,

But it ain't to be bought - not for gold'

Servin' cawfee and cake to the swaddies.

An' they're there all the night, with a kind word or two -

Lor' - they must have eight 'earts in their bodies.

That they're just like them gels in the station.

But who's payin' for all this 'ot drink?"

I SHOULD say, those of 'em who THINK!"

Well, whatever they've give - if it's pennies or quids,

As sure as the Lord's up above 'em,

Their names'll be writ in the Good Book some day,