With thanks to Johan Moors of Flanders Fields Museum for finding this poem by Irish poet and writer James Stephens (9 February 1880 – 26 December 1950)  which, although not written during WW1, is relevant to remembrance: 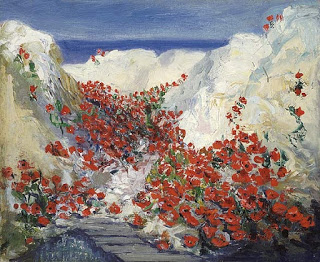 “In the Poppy Field”

Mad Patsy said, he said to me,

That every morning he could see

An angel walking on the sky;

Across the sunny skies of morn

He threw great handfuls far and nigh

Of poppy seed among the corn;

And then, he said, the angels run

To see the poppies in the sun.

A poppy is a devil weed,

I said to him - he disagreed;

He said the devil had no hand

In spreading flowers tall and fair

Through corn and rye and meadow land,

By garth and barrow everywhere:

The devil has not any flower,

But only money in his power.

And then he stretched out in the sun

And rolled upon his back for fun:

He kicked his legs and roared for joy

Because the sun was shining down:

He said he was a little boy

And would not work for any clown:

He ran and laughed behind a bee,

And danced for very ecstasy.

"In the Poppy Field" was published in the 1912 Georgian Poetry anthology put together by Edward Marsh.

Red poppies, about which Canadian poet, artist, doctor and artilleryman Colonel John McCrae wrote (see Forgotten Poets), has been evident after every battle in Flanders over hundreds of years. British historian Lord Macaulay wrote in 1855 about the site of the Battle of Landen in the Province of Brabant that took place in 1693, during the Nine Years War between the French and the English, when William III was on the throne.  Landen is in Belgium and is approximately one hundred miles from Ypres.  The French lost 9,000 men and the English 19,000:

"The next summer the soil, fertilised by twenty thousand corpses, broke forth into millions of poppies. The traveller who, on the road from Saint Tron to Tirlemont, saw that vast sheet of rich scarlet spreading from Landen to Neerwinden, could hardly help fancying that the figurative prediction of the Hebrew Prophet was literally accomplished, that the earth was disclosing her blood, and refusing to cover the slain."

John McCrae's WW1 poetry collection "In Flanders Fields and Other Poems" can be viewed here::  http://www.gutenberg.org/files/353/353-h/353-h.htm

Picture:  A painting entitled "Trenches on the Somme" by Canadian Artist Mary Riter Hamilton, who went to paint the aftermath on the Western Front in 1919. Mary's paintings were commissioned by the Canadian War Amputees Association and can be viewed on www.collectionscanada.gc.ca