With thanks to Becky Bishop for finding Evan Morgan, who was a cousin of Raymond Juzio Paul de Rodakowski-Rivers (1895 - 1917) 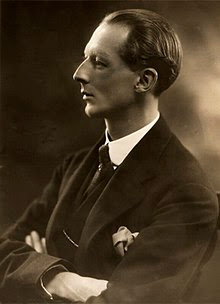 Born on 13th July 1893, Evan’s parents were Courtenay Morgan, 1st Viscount Tredegar, of Tredegar Park, Monmouthshire, Wales, and his wife, Lady Katharine Carnegie.  Educated at Eton College and Christ Church, Oxford University, Evan was commissioned into the Welsh Guards in 1915 and served during WW1 as a King’s messenger (Carrying diplomatic papers to Embassies), working for French General Robert Nivelle in North Africa, after which he became ill. While recuperating at Garsington Manor, Evan became friends with another Oxford graduate, the poet Robert Graves, who had been at school with Evan's cousin, Raymond Rodakowski-Rivers and who was recuperating after being wounded while serving in France.

In 1917, following a period of ill health, Evan became private secretary to British government minister William Clive Bridgeman. From 1915 to 1916, Bridgeman was Lord of the Treasury and Assistant Director of the War Trade Department. With the creation of Lloyd George's coalition in 1916, Bridgeman became Parliamentary Secretary to the Ministry of Labour until 1919 and then Parliamentary Secretary to the Board of Trade in 1919 and 1920, after which he served as Secretary for Mines from 1920 to 1922.

On 3rd March 1934, Evan succeeded to the title of 6th Baronet Morgan, 4th Baron Tredegar, and 2nd Viscount Tredegar, after the death of his father.

During the Second World War, Evan served with MI8, his responsibility was to monitor carrier pigeons. He carelessly let slip on occasion departmental secrets to two girl guides and was court martialed but not sent to jail or worse.

He painted a good deal in his youth and exhibited his works at the Paris Salon. He was a knowledgeable collector of works of art, particularly of the period of the Renaissance in Italy. He published one novel – “Trial by ordeal” in 1921 and a number of volumes of poems, among them these WW1 collections:

He also had a poem published in Kyle Galloway’s “Soldier Poets: Songs of the Fighting Men” (Erskine Macdonald, London, 1916)

Knight of Honour and Devotion, Sovereign and Military Order of Malta

Knight of Justice, Order of St. John of Jerusalem (KJStJ)

Commander, Order of the Holy Sepulchre (with star)Here is one of his poems:

IF in the repose of an arbour

Under a western sky

One dreams of a vast eternal

And one questions the reason why ;

Why joy should dissolve into sorrow,

Why pearls should melt in the wine,

And whether the new dawning morrow

Will reckon the close of our time ?

If in the repose of the arbour

One gazes on nature around,

Is there some definite answer

In the earth or the sky to be found ?

Are we the pawns of a Jevah

That move on a cross-chequered board ?

Propelled from the back by a lever,

Controlled, supervised by a Lord ?

Given a pen as a plaything

To scribble out poems and plays

Works that we worship with reverence,

The blossoms of earlier days

Given a spirit of reason,

Given a mind to attend,

Given a soul filled with treason

To embitter and poison the end ?

Is there a peaceful Nirvana ?

Is there a rest for the soul ?

A bed for the toil-driven Karma,

What of the slain in the battle ?

What of the dead on the field ?

Those men that we use as a shield :

If ever a soul got to Heaven !

If ever soul reaped a reward !

Those whose red blood has been given

A gift to their own native sward :

Those are the ones for a Heaven,

For a peace and a pleasure unknown,

By their work are they all self-forgiven,

Let their blood for His Blood atone.

From “Soldier Poets: Songs of the Fighting Men” Edited by Galloway Kyle (Erskine Macdonald, London, 1916) which is available as a free download on Archive: