It is always exciting to hear of another forgotten WW1 soldier poet. As AC Benus says “…Hans can speak for all men and women who have ever had to face armed conflict first hand. It has much to teach we who have never been to war as well.” 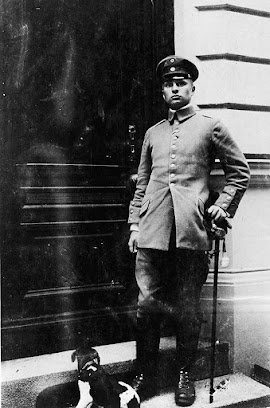 Hans Ehrenbaum-Degele was born in Berlin, Germany, on 24th July 1889.  His father was Fritz Ehrenbaum, a prominent banker and his mother, Emilia Thekla “Mary” Degele, who was an artist, was the daughter of opera singer Eugen Degele. Hans studied in Berlin and Heidelberg during the heady early days of the Expressionist movement.  His first poems were published in 1911.

Hans served as an officer in the German Army during the First World War and was killed fighting on the Eastern Front on 28th July 1915, while fighting on the Narew River in what is now Poland. After his death, the poet Else Lasker-Schüler immortalised him in her poetry collection entitled “Tristan”. She had met Hans in 1911 at a poetry slam - a competition arts event, in which poets perform spoken word poetry before a live audience and a panel of judges.

Here is one of his poems - translated by AC Benus

“Regiment poem No. 30” (Hans and his friends referred to this poem as "Advent")

HERE in cold storm and tinkling iron for us,

Surrendered to the quiet rage of ramparts,

We live so desolate, so forgotten,

Frozen between winning and losing all;

Here no Christmas trees twinkle lit for us,

When home bedecks itself in merriment;

There, where kids run joyously into rooms,

And the eyes of women shine with wonder –

Come to us over the snow-covered hillsides,

You Christ of old, moved by the world's suff'ring,

Spread yourself in the sky upon silver wings

High over us so that from the darkest earth

Our wound may be borne gently as your wound,

Lifting with you the great hardship of the hour.

The photograph of Hans in his WW1 uniform was possibly taken by his partner W.F. Murnau, who went on to become the world's most admired film director, as it's part of his archived papers.  Hans is standing at the front door of their home's in Grunewald, Berlin. Their puppy shown here was named "Pan."

With grateful thanks to AC Benus who sent me a message concerning his new book about the poet Hans Ehrenbaum-Degele, with commentary, a biography of the poet and translation of Hans Ehrenbaum-Degele’s poetry collection entitled "The Thousandth Regiment" - which also mentions other WW1 poets.

This book is very timely as it comes at another time of turmoil in the world and it has much to offer to both poetry lovers and those interested in the history of the First World War.  I urge you all to read it.  As A.C. Benus says “…Hans can speak for all men and women who have ever had to face armed conflict first hand. It has much to teach we who have never been to war as well.” 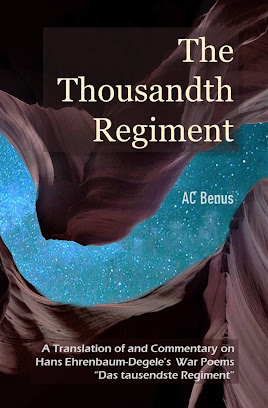 "The Thousandth Regiment: A Translation of and Commentary on Hans Ehrenbaum-Degele’s War Poems” by AC Benus (AC Benus, San Francisco, 2020)

This book is a fascinating read and the poems are wonderful and have been beautifully translated. I am glad to say the original poems are also included.