Some of the poets, artists and writers who received awards for outstanding bravery during WW1 that I have found so far during the course of my research for a series of commemorative exhibitions.  If you know of any others please let me know:
Poets and Writers

Geoffrey Winthrop Young (1876 - 1958) - British poet and mountaineer; served with the Friends Ambulance Unit,and later in command of the First British Ambulance for Italy. He was mentioned in British Despatches and awarded the Belgian Order of Leopold for exceptional courage and resource, and the Italian silver medal' for Valour'

William Robert Gregory MC (1881 – 1918)  - Irish-born, RFC/RAF British airman, artist and cricketer; France made him a Chevalier of the Legion d'Honneur in 1917

Waldo Peirce (December 17, 1884 – March 8, 1970) was an American painter, who for many years reveled in living the life of a bohemian expatriate.  Croix de Guerre

Gerald Spencer Pryse MC (1882–1956) was a British artist and lithographer.

Dents Wells, BEM (1881-1973) served in the Artists Rifles during WWI; awarded a B.E.M. for gallantry. https://en.wikipedia.org/wiki/British_Empire_Medal

NOTE;  James Miles Langstaff ( 1883 - 1917) was Mentioned in Despatches and recommended for a Military Cross.

Medal Shown above:  British Military Cross. The Military Cross award was created on 28th December 1914 for commissioned officers of the substantive rank of Captain or below and for Warrant Officers. Awards were announced in “The London Gazette”.  From August 1916, recipients of the Cross were entitled to use the post-nominal letters MC, and bars could be awarded for further acts of gallantry meriting the award.

The Military Medal (MM) see left - was a military decoration awarded to personnel of the British Army and other arms of the armed forces, and to personnel of other Commonwealth countries, below commissioned rank, for bravery in battle on land.

The award was established in 1916, with retrospective application to 1914, and was awarded to other ranks for "acts of gallantry and devotion to duty under fire".

The Military Medal was discontinued in 1993 when it was replaced by the Military Cross, which was extended to all ranks, while other Commonwealth nations instituted their own award systems in the post war period. 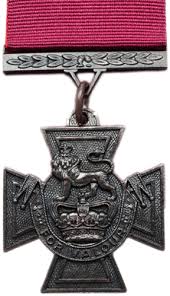 The Victoria Cross (VC) is the highest military decoration awarded for valour "in the face of the enemy" to members of the armed forces of various Commonwealth countries, and previous British Empire territories. It takes precedence over all other orders, decorations and medals.

The VC t may be awarded to a person of any rank in any service and to civilians under military command. The VC is usually presented to the recipient or to their next of kin by the British monarch at an investiture held at Buckingham Palace.

The VC was introduced on 29th January, 1856 by Queen Victoria to honour acts of valour during the Crimean War. Since then, the medal has been awarded 1,358 times to 1,355 individual recipients.