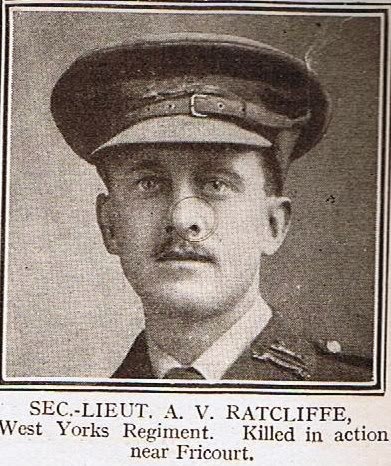 Born in Gravesend in 1887, Alfred Victor was the third son of Frederick Edwin Ratcliffe and Florence Anne Ratfcliffe, nee Brotherton.  The Ratcliffes had three sons - Alfred Victor (1887b - 1916), Charles Frederick Brotherton (1882 – 1949) and Edward Brotherton (1885 – 1938).  Alfred’s mother was sister to Lord Brotherton, a chemical millionaire from Manchester, who lived in a house called “Roundhay” in Leeds.


Alfred attended Dulwich College before going on to Sidney Sussex College, Cambridge, where he studied law. In 1914, Alfred was a teacher at Framlingham College in Suffolk but left there and joined the Army, putting his law studies on hold. He was commissioned into the West Yorkshire Regiment.

At that time Alfred Victor was engaged to be married to Miss Pauline Benson Clough, daughter of Mr. George Benson Clough a barrister of Oxshott, Surrey. Pauline was a younger sister of Female Poet of the First World War Dorothy Una Ratcliffe, who  married Alfred Victor’s brother Charles in 1909. At Cambridge University, Alfred was a friend of the soldier poet Rupert Brooke, and many of his poems had been published and were very well received.

Second-Lieutenant Alfred Victor Ratcliffe was killed in action on The Somme on 1st July 1916, near the third line of the German trenches, near Fricourt, while gallantly leading his company. He was twenty-nine years old.  A fellow officer wrote to his mother after his death: “Your son’s work was very highly thought of by his company officer, who also lost his life in the fight, and ‘Ratters’, as we called him, was very popular with everyone. His senior officer having been killed earlier on, your son was commanding the company at the time of his death. From where we found his body he must have led it pluckily and well. It may be some consolation to know that the regiment fought magnificently and that your son helped largely towards this distinction."  He is buried in Fricourt Cemetery near Albert in France.

Alfred Victor Ratcliffe’s poems were published in several WW1 poetry anthologies, among them “A Treasury of War Poetry: British and American Poems of the World War 1914 – 1917” published by Houghton Mifflin in 1917 and edited by George Herbert Clarke, “Soldier Poets: Songs of the Fighting Men” edited by Galloway Kyle, published in 1916 by Erskine Macdonald, “The Muse in Arms:   A Collection of War Poems for the most part written in the field of action by seamen, soldiers, and flying men who are serving, or who have served, in the Great War” edited by Edward Bolland Osborn and published by Murray in 1917 and “The Valiant Muse: An Anthology of poems by poets killed in the World War” edited by Frederic W. Ziv and published in New York by Putnam in 1936.