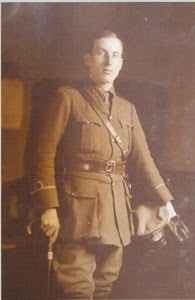 With many thanks to Phil Davies for bringing Shaw-Stewart to my attention.

Patrick Shaw-Stewart was born on 17th August 1888 in Wales.  His parents were Major-General John Heron Maxwell-Shaw of the Royal Engineers and his wife Mary Katherine Bedingfield.

He was educated at Eton and Oxford where he was an outstanding classics scholar, winning many prizes and where he was a contemporary of Julian Grenfell. After university, Shaw-Stewart went to work at Barings Bank, where he was promoted to the post of Managing Director in 1913.  He was a member of the social group called the "Coterie" that centred around Lady Diana Manners, a socialite of the era.

When was was declared Shaw-Stewart was travelling on bank business in America but returned to Britain where he joined the Royal Navy.  He was commissioned into the Hood Battalion, 2nd Brigade of the Royal Naval Division, where he served with Rupert Brooke.  He attended Rupert Brooke's funeral in Greece on 23rd April 1915, in charge of the ceremonial firing party. While waiting to be posted to Gallipoli, Shaw-Stewart wrote his most famous poem - "Achilles in the Trench".

He worked as a liaison officer with French forces in Salonika in 1916, for which he received the Croix de Guerre.

Shaw-Stewart was promoted to the rank of Lieutenant Commander of the Royal Naval Division and rejoined the Hood Division on the Western Front in May 1917.  He  was killed at on 30th December 1917. He is buried in the British extension to the Communal Cemetery at Metz-en-Couture in the Nord Pas de Calais area of France.

Shaw-Stewart's poem, very famous at the time of the First World War, was published in the following WW1 Anthologies:

"Vain Glory:  A Miscellany of the Great War 1914 - 1918 written by those who fought in it on each side and on all fronts", edited by Guy Chapman, published by Cassell in 1937 and