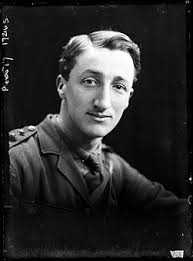 Alan Patrick Herbert was born on 24th September 1890. His parents were Patrick Herbert, a civil servant, and his wife Beatrice Eugenie, nee Selwyn, daughter of Sir Charles Jasper Selwyn, a lawyer. Patrick and Beatrice had two other sons – Sidney, born in 1892, and Owen, born in 1894. Beatrice died when Alan was eight years old.

Alan was educated at The Grange preparatory school in Folkestone, before going on to Winchester College, then New College Oxford, where he eventually studied law.

In 1915, Alan married Gwendolyn Harriet Quilter, who he met in 1914 and they went on to have four children.  When war broke out, Alan joined the Royal Naval Volunteer Reserve as an Ordinary Seaman.  The RNVR formed part of the Royal Naval Division and Alan was commissioned as a Sub-Lieutenant before being posted to Hawke Battalion and sent to Gallipoli in May 1915.   He was taken ill and sent back to Britain to recuperate, after which he was seconded to Naval Intelligence. 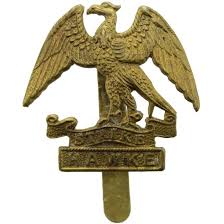 In July 1916, Alan returned to Hawke Battalion, which by then was serving on the Western Front on The Somme.  He took part in the Battle of the Ancre, from which he was one of only two officers to survive.   Alan became Adjutant of the Battalion and was badly wounded at Gavrell, near Arras, in April 1917 and had to be invalided home. His novel, “The Secret Battle”, drawing upon his experiences during the war, was published in 1919.  Alan’s younger brother, Owen Herbert went missing, presumed dead after the Battle of Mons in 1914 and his other brother, Sidney, was killed in 1941.

During the Second World War, Alan volunteered with his boat ‘The Water Gypsy’ for the River Emergency Service on the Thames.  He wrote the lyrics to the ‘Song of Liberty’ which was very popular during WW2.

A.P. Herbert’s collections of First World War poetry were ‘Half Hours at Helles’ published in 1916 by Blackwell, Oxford and ‘The Bomber Gypsy and Other Poems’ published in 1919 by Methuen, London. His poems were included in ten WW1 anthologies. You can read “The Secret Battle” on the Project Gutenberg website http://www.gutenberg.org/files/35164/35164-h/35164-h.htm 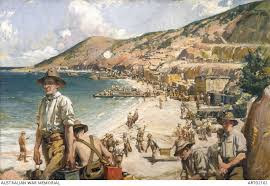 “The Beach at Anzac” by Frank Crozier

When I consider how my life is spent

In this dark world of sugar-cards and queues,

Where none but babes get proper nourishment

And meanly men remunerate the Muse,

I dream of holidays when Peace is sent,

But not such dreams as common persons use –

I know a headland at the Dardanelles

Where I shall build the best of all hotels.

I know a cliff-top where the wealthy guest

From languid balconies shall each day view

And melt, a marvel, into Europe’s blue,

To come back blushing out of Asia’s breast

And hang, at noon, divided ‘twixt the two,

While shuttered casements looking out to Troy

Shall faintly stimulate the Fifth-form boy.

There shall they have, with those delicious skies,

All that rich ease for which the Armies prayed,

Nor dust nor drought nor shortage of supplies,

But long cool glasses in the cypress’ shade,

And starlight suppers, and, of course, no flies,

And in their bathing-place no mules decayed;

Shall swim in the Aegean, if they want,

Or go and do it in the Hellespont.

There shall they hear from olives overhead

The cricket call to them and no shells sing,

While painted lizards flash before the sudden Spring;

Shall walk, unblended by disease and dread,

Where myrtle beckons and rock-roses cling,

And find it difficult to tell their aunts

The proper names of all these funny plants.

There shall they see across the storied Sound

And tread old battle-fields where vineyards are;

The Turks’ entanglements at Sedd-el-Bahr,

And practice at a reasonable charge

Heroic landings in the hotel barge.

But there are dates when tourists shall be Banned,

High dates in April and of early June,

When only they that bear the Helles Brand,

A few tired Captains and the Tenth Platoon,

Shall see strange shadows in that flowery land,

And ghostly cruisers underneath the moon:

They only then shall scale the sunny hills,

And they alone shall have no heavy bills.

Copyright by A. P. Watt on behalf of Crystal Gale & Jocelyn Herbert.