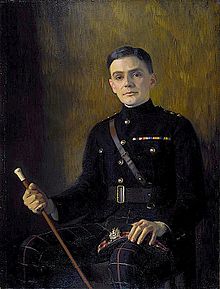 Educated at Winchester College and Edinburgh University, Charles was commissioned into the King’s Own Scottish Borderers Regiment. On

23rd April 1917, Charles was badly wounded in the leg by an exploding shell, while leading his men. He was sent back to Britain to recuperate and managed to avoid losing his leg but was left with a limp.

Invalided out of the Army, Charles went to work at the War Office in Whitehall, London until the end of the war. He also worked as a reviewer for the magazine “New Witness”, edited by G.K. Chesterton.

In January 1918, Charles met Wilfred Owen at the wedding of Robert Graves to Nancy Nicholson at St. James in Piccadilly.

After the war, Charles worked for a year as private secretary to Alfred Harmsworth the press baron. He then moved to Italy for health reasons and began translating works by foreign authors, including Marcel Proust’s “A la recherché du temps perdu”. Charles died of cancer in Rome in 1930 and was buried in Campo Verano.

The WW1 poetry collection of Charles Scott Moncrieff “War thoughts for the Christian year” was published in 1915 by Skeffington. He also had a poem published in “The Muse in Arms” anthology, edited by Edward Bolland Osborn and published by Murray in 1917.

Mud-stained and rain-sodden, a sport for flies and lice,

Out of this vilest life into vile death he goes;

His grave will soon be ready, where the grey rat knows

There is fresh meat slain for her. Our mortal bodies rise,

In those foul scampering bellies, quick…

And yet those eyes

That stare on life still out of death and will not close,

Seeing in a flash the Crown of Honour, and the Rose

Of Glory wreathed about the Cross of Sacrifice,

Leaving his London cares behind you, journeying West

To the brief solace of a carnal holiday,

Quicken again with boyish ardour, as he sees,

For a moment, Windsor Castle towering on the crest