William was born on 25 th September 1897 in New Albany, Missippi, USA. He was the eldest of four sons born to Murry C. Falkner and his wife Maud F. Falkner, nee Butler. William had the following siblings: Murry Charles, b. 1899, John, b. 1901 and Dean Swift, b. 1907. John also became a writer. The family later moved to Oxford, Missippi.

During the First World War, William worked as a clerk in a munitions factory in Connecticut then volunteered to join the Royal Flying Corps in Canada, where he began training as a pilot.

After the war, William married Estelle Oldham, who had two children from a previous marriage.  He went to work as a screen writer for MGM in California. In 1949, he was awarded the Nobel Prize for Literature. William died on 6th July 1962 from complications to injuries sustained when he fell off his horse. He was buried in St. Peter’s Cemetery, Oxford, Missippi.

Extract from “A POPLAR” by W. FALKNER.

Why do you shiver there

Between the white river and the road?

You are not cold,

With the sun light dreaming about you;

And yet you lift your pliant supplicating arms as though

To draw clouds from the sky to hide your slenderness. 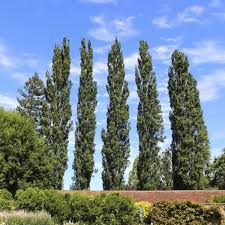 According to the Celtic code of symbolic trees, the poplar is associated with victory, transformation and vision.  The poplar trees of northern France were legendary long before WW1 began but they took on a particular significance during and after the conflict.

In Birkenhead, Wirral, UK a playing field and pavilion opened in 1926 as a memorial to the 88 students of the Birkenhead Institute school who were killed in the First World War, among them Wilfred Owen the poet. In 1933, 88 poplar trees were planted round the edge of the field in memory of the fallen. The pavilion on site had a mounted rectangular tablet bearing a memorial inscription. Ornamental memorial gates were also added in 1933. In 1938 a bell was donated by Mr and Mrs Luton in memory of their son killed in the First World War.  The field was sold recently for property development and a statue has been made in recompense. The “Futility” Statute, situated in Hamilton Square, Birkenhead, was designed by Wirral based sculptor Jim Whelan and was inspired by an original drawing by David S.W. Jones - a former pupil and art teacher at the Birkenhead Institute. 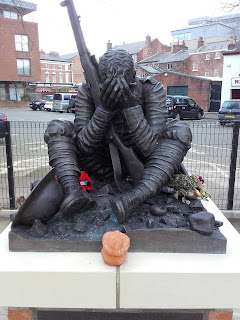 Looking through some of the Facebook Groups dedicated to WW1 commemoration some years ago, I found a reference to a Canadian Officer who lived in England and when he came back after WW1 he planted poplar trees in memory of his fallen comrades.  I wonder if those poplar trees are still there?

"Aviator Poets and Writers of the First World War" - book of the exhibition  held at Cosford Air Show, June 2018