With thanks to AC Benus for drawing my attention to the fact that John Reed also wrote poems.  John Reed is now probably best known for the book “Ten Days that Shook the World”, an eyewitness account of the Russian Revolution, based on the reports he sent to the magazine“The Masses” in the early autumn of 1917.  Perhaps there is a clue regarding his poetry here: “John Reed was so active in radical politics as to have too little time left for poetry,” wrote Harriet Monroe in her “Poetry” magazine, explaining why Reed’s poetry career had never reached its full potential. “Knowing himself for a poet, he hoped to prove his vocation by many poems worthy to endure; but life was so exciting, and the social struggle in these States and Mexico, in Finland, Russia –everywhere - so tempting to a fighting radical, that poetry had to wait for the leisure which - alas! - never came.” Did he write anything about the war or the Revolution?  Perhaps we will never know. 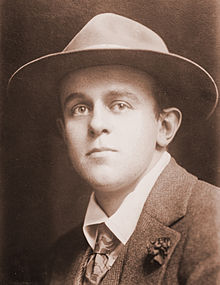 John Silas Reed was born in Portland, Oregon, USA on 22nd October 1887.  His father, Charles Jerome Reed, was a representative of a manufacturer of agricultural machinery, who served for a time as a US Marshal. John’s mother, Margaret, was from a well-known Portland family called Green. John was not a strong child and had several bouts of illness.  Educated at Moristown School, New Jersey, before going on to Harvard, John went on a tour of Europe after graduating and, on his return, his father’s friend Lincoln Steffans, a radical, investigative journalist, got him a job on “The American Magazine”.

In June 1906, journalists Ray Stannard Baker, Lincoln Steffens and Ida M. Tarbell created "The American Magazine".  So began John's career as a journalist.   He later worked for the "Metropolitan Magazine".

Blakely Hall founded the “Metropolitan Magazine” in 1895. In 1898 the magazine became more serious and began publishing articles by Rudyard Kipling, Joseph Conrad and Booth Tarkington.  Harry Payne Whitney purchased the magazine in 1912 and installed the socialist and member of the Fabian Society, H. J. Wigham, as editor. He began publishing the work of George Bernard Shaw, Walter Lippmann, Morris Hillquit and Theodore Dreiser. Later on, Carl Hovey became the editor of the magazine.

In December 1913, Hovey sent John Reed to Mexico to report on Pancho Villa and his army. Former communist Bertram D. Wolfe (1896 – 1977) argued: "To Reed the Mexican Revolution was a pageant, a succession of adventures, a delight to the eye, a chance to discover that he was not afraid of bullets. His reports overflow with life and movement: simple, savage men, capricious cruelty, warm comradeship, splashes of color, bits of song, fragments of social and political dreams, personal peril, gay humor, reckless daring... Reed's mingling of personal adventure with camera-eye close-ups lighted by a poet's vision made superb reporting."

Carl Hovey was very impressed with Reed's work in Mexico. After he received one of his articles he sent a telegramme to Reed: "Nothing finer could have been written. We are absolutely delighted with your stuff.”  John's reports from Mexico were later collected and published as “Insurgent Mexico”, which earned him the reputation of being one of the great war correspondents.

John also covered the class war and the striking coal miners in Ludlow, Colorado, before being sent to France to report on the First World War for the “Metrolopitain Magazine”.  John reported on both Allied and German lines but, due to his socialist views, he was not granted the same insider’s view as he had been in Mexico.  On his return, John declared to the Americans “This is not our war” and opposed America’s entry into the conflict, speaking often at anti war meetings.  John also worked for “The New York Mail” newspaper, which, it was later revealed, was financed by the German Government.

On 9th November 1916, John married the feminist, political activist, and journalist Louise Bryant (1885 – 1936), who was born Anna Louise Mohan but preferred to use the surname of her stepfather, Sheridan Bryant. Eleven days after the wedding, John had emergency surgery to remove one of his kidneys.

I
In the autumn of 1917, John and Louise sailed for Russia to report on the Revolution for “The Masses” magazine. John was not permitted to return to the United States due to a sedition charge against him for articles he had written for “The Masses”.

When he was finally allowed back into the country, John switched from journalism to politics, and organized the Communist Labor Party, one of the two rival communist parties in the United States. When “Ten Days that Shook the World” was published in 1919, John was in trouble and was indicted as a communist leader during the “Red Scare” after the First World War.  He fled the country, eventually returning to Russia where he continued trying to teach the world about the Bolshevic Revolution and encouraging people to follow their exampe.

He died of typhus in Moscow on 17th October 1920. John Reed was buried, honoured as a Soviet hero, under the Kremlin wall facing the Red Square, the only American and one of the few foreigners to receive such an honour.

The 1981 film “Reds”, starring Diane Keaton as Bryant and Warren Beatty as Reed, tells the story of their Russian adventure.  Supporting actors include Jack Nicholson as Eugene O'Neill, Maureen Stapleton as Emma Goldman, Jerzy Kosiński as Grigory Zinoviev (one of the Bolshevik leaders), and Edward Herrmann as Max Eastman.

Here is one of John Reed’s poems:

Wind smothers the snarling of the great ships,

And the serene gulls are stronger than turbines;

Mile upon mile the hiss of a stumbling wave breaks unbroken –

Yet stronger is the power of your lips for my lips.

This cool green liquid death shall toss us living

Higher than high heaven and deeper than sighs –

Shall not forbid our taking and our giving!

Life wrenched from its roots – what wretchedness!

Even the still ooze beneath is quick and profound –

I am less and more than I was, you are more and less.

I cried upon God last night, and God was not where I cried;

He was slipping and balancing on the thoughtless shifting planes of sea.

Careless and cruel, he will unchain the appalling sea-gray engines –

But the speech of your body to my body will not be denied!

By John Reed, Published in “The Masses” magazine, May 1916

The complete poetry of John Reed 1887-1920 is available to read on loan on an hourly bsis from Archive:    https://archive.org/details/completepoetryof0000reed/page/28/mode/2up

“The Masses” was America's leading  monthly socialist magazine. It was founded in 1911 by Piet Vlag, a Dutch immigrant journalist, whose aim was to educate the working people of America about art, literature, and socialist theory.  In 1917, Federal prosecutors brought charges against the magazine’s editors for conspiring to obstruct conscription. “The Masses” was succeeded by “The Liberator” and later by “The New Masses”. It published reports, fiction, poetry and art by the leading radicals of the time such as Max Eastman, John Reed, Dorothy Day, and Floyd Dell. Numerous denunciations of American participation in the First World War were published in “The Masses”, many written by Max Eastman, provoking controversy and reaction. Eastman was twice indicted and stood trial under provisions of the Sedition Act, but was acquitted each time. In a July 1917 speech, he complained that the government's aggressive prosecutions of dissent meant that "[y]ou can't even collect your thoughts without getting arrested for unlawful assemblage". In 1918, “The Masses” was forced to close due to charges under the Espionage Act of 1917.

In his first editorial for "The Masses", Eastman wrote:

"This magazine is owned and published cooperatively by its editors. It has no dividends to pay, and nobody is trying to make money out of it. A revolutionary and not a reform magazine: a magazine with a sense of humour and no respect for the respectable: frank, arrogant, impertinent, searching for true causes: a magazine directed against rigidity and dogma wherever it is found: printing what is too naked or true for a money-making press: a magazine whose final policy is to do as it pleases and conciliate nobody, not even its readers."