It seems that Frank was born in 1882.  According to a report in “Trench and Camp” (Deming, New Mexico) of 30th October 1917, Frank may possibly have come from from Douglas, Arizona and he must have  joined the army because he served with the “2nd Montana Infantry on the Mexican Border.”   Referring to the First World War, the report continues “When war was declared, he applied for admittance to the Officers’ Training Camp but, owing to loss of weight and a bad right leg, he was turned down by the examining physicians”.

As a result of that rejection, Frank “… decided to make what he calls his enthusiasm-arousing campaign” embarking on a 35-week tour of all the “army camps and contonments in the United States, gathering data for a collection of new soldier ballads pertinent to the life of the American soldier.”  “At each camp he visits, he secures permission from the Commanding Officer to read  his collection of ballads about the life of the American soldier.” 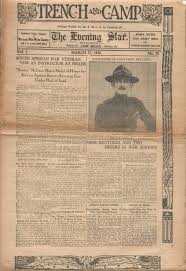 “Trench and Camp” newspaper was published weekly by the National War Work Council of the YMCA, in partnership with various city newspapers, for soldiers during The First World War. The paper was printed in different editions for each of the thirty-two cantonments, with about half the material supplied from a central editorial office in New York, and half by local reporters.

Its purpose was “to print the news, to inform, to stimulate, and to help relieve the tedium and monotony of camp life” for soldiers, as well as “to be a graphic account of the life of our soldiers, whether they be drilling or fighting, at home or ‘over there’ for civilians. Contributions from soldiers include descriptions of the entertainments at the camps, athletic contests, educational lectures, jokes, and poetry, as well as personal columns telling of their experiences. The papers also sponsored cartoon contests, resulting in many good pictures portraying camp life. In addition, each Trench and Camp was a channel of communication to the troops from the President, Congress, and War Department.

Described as a “soldier poet” in an article in the “Anniston Star” newspaper of 24th June 1919, after the war, Frank apparently joined the United States Forestry and “made his base at the Coram Ranger Station, eighty miles from the nearest railroad line.”   Frank obviously had time to write as his book “Alaska Nuggets” was published in 1922.  He also published “Alaska Tales For The Cheechako” but I’m not certain when that was published.

NOTE; A Cheechako is someone new to Alaska, ignorant in the ways of the Last Frontier and lacking the skills required to survive the Alaskan wilderness.

Page 4 of the “Cordova Daily Times” of 7 December 1921 has an article under the heading “Clever Poems by Local Author”, so it seems that by then Frank may have been living in Cordova, Tennessee.

Historical information taken from the collection and from "Thirty-two Camps Have Newspaper in Common," New York Times, 6 Jan 1918.

The poem that led me to the discovery of Camp was apparently inspired by  “Our Hitch in Hell” by Frank Bernard Camp, which “became so popular so quickly that between 1917 and 1921 many people started plagiarizing it.”

"Our Hitch in Hell" is a ballad by American poet Frank Bernard Camp, originally published as one of 49 ballads in a collection entitled "American Soldier Ballads", that went on to inspire multiple variants among American law enforcement and military, either as The Final Inspection, the Soldier's Prayer, the Policeman's Prayer, etc. 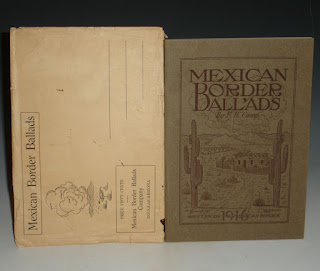 As far as I have been able to ascertain, Frank Bernard Camp’s poetry collections were:

“Mexican Border Ballads” (Douglas, Arizona, 1916) Poetry written while guarding the Mexican border and about the soldiers who guard the border.

“OUR HITCH IN HELL”

The musings of a soldier revised and set down in verse

EVERY day and night I'm thinking of the things I left behind,

Yet I loath to put on paper what is running through my mind,

But I think I'll feel much better, so I guess I'll take a chance,

Ere the regiment is ordered to the shores of sunny France.

We've dug a million trenches and have cleared ten miles of ground,

And a meaner place this side of Hell, I know has ne'er been found,

We've drilled in dust and scorching sun, in mud and driving rain,

'Till our eyes and ears and legs and arms were yelling loud with pain.

But there's still one consolation, gather closely while I tell,

When we die we're bound for Heaven, 'cause we've done our hitch in Hell.

We've built a thousand mess halls for the cooks to stew our beans,

The number of parades we've made is awfully hard to tell,

But we'll not parade in Heaven, for we paraded here in Hell.

We've passed a million sleepless hours upon our army cots,

And shook a hundred centipedes from out our army socks,

We've marched a hundred thousand miles and made a thousand camps,

And pulled a million cacti thorns from out our army pants,

So when our work on earth is done, our friends behind will tell,

" When they died they went to Heaven, 'cause they did their hitch in Hell."

The slum and coffee we have cussed, likewise the Willie canned,

We've damned the gentle gusts of wind that filled the air with sand,

And the vaccine scratched upon our arms has made them very sore,

With all these things to get our goats, we all are here to tell,

When the order comes to cross the pond we'll give the Germans Hell.

When the final taps is sounded and we lay aside life's cares,

And we do the last and gloried parade, on Heaven's shining stairs,

We can draw a million canteen checks and spend them in a day,

It is then we'll hear St. Peter tell us loudly with a yell,

"Take a front seat you soldier men, you've done your hitch in Hell."