Born in Stillorgan, County Dublin, William Orpen was the fourth and youngest son of Arthur Herbert Orpen (1830–1926), a solicitor, and his wife, Anne, nee Caulfield (1834–1912), the eldest daughter of the Right Rev. Charles Caulfield (1804–1862), Archdeacon of the Bahamas, who was consecrated Bishop of Nassau and the Bahamas at Lambeth Palace on 1 December 1861.

Both William’s  parents were amateur artists and his eldest brother, Richard Caulfield Orpen, became an architect.

During The First World War, Orpen was the most prolific of the official war artists sent by Britain to the Western Front. He produced drawings and paintings of ordinary soldiers, dead men, and German prisoners of war, as well as portraits of generals and politicians. He donated the majority of these works - 138 in all -  to the British government and they are now in the collection of the Imperial War Museum, London.

Orpen's connections to the senior ranks of the British Army allowed him to stay in France longer than any of the other official war artists, and although he was made a Knight Commander of the Order of the British Empire in the 1918 Birthday Honours, and also elected a member of the Royal Academy of Arts, his determination to serve as a war artist cost him both his health and his social standing in Britain.

William Orpen’s book about his war-time observations, “An Onlooker in France 1917 – 1919” (Richard Clay & Sons, London, 1921) is available as a down-load on the Gutenberg Project:

“A Memory of the Somme” a poem by Sir William Orpen. 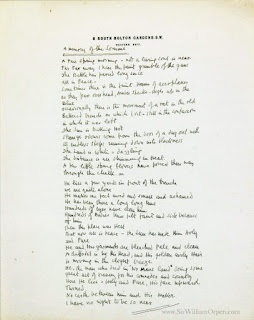 A fair Spring morning – not a living soul is near.

Far Far away I hear the faint grumble of the guns.

The Battle has passed long since, all is Peace.

Sometimes there is the hum of aeroplanes as they pass overhead,

Amber specks high up in the blue.

Occasionally there is the movement of a rat in the old battered trench on which I sit – still in the confusion of which it was left.

The sun is baking hot, strange odours come from the door of a dug-out with its endless steps running down into blackness.

The land is white – dazzling.

The distance is all shimmering in heat.

A few little spring flowers have forced their way through the chalk.

He lies a few yards in front of the trench, we are quite alone.

He makes me feel awed and small and ashamed

He has been there a long long time.

Hundreds of eyes have seen him.

Hundreds of bodies have felt faint and sick because of him.

This place was Hell.

But now all is peace – the sun has made him Holy and Pure.

He and his garments are bleached pale and clean.

A daffodil is by his head and his golden curly hair is moving in the slight breeze.

He, the man who died in “No Man’s Land” doing some great act of bravery for his comrades and country.

Here he lies – Holy and Pure, his face upward turned.

No earth between him and his maker.

I have no right to be so near.

With thanks to Dominic Lee for bringing to our attention the poem by Orpen.
Source: http://www.sirwilliamorpen.com/a-memory-of-the-somme-by-sir-william-orpen/?fbclid=IwAR2gj7Y0MqFBgVfurZvkJyFCvOjdqbhSxMcXfteGwF8wnwym8NHVSe54PVA