With thanks to Sheila and Jim Maxwell of the Harlech Old Library and Institute for telling me about Dafydd, and to Clive Hughes of the Royal Welch Fusiliers Museum for information and for his wonderful translation of the poem, to Keith Edmonds and Robin Braysher of the Salonika Campaign Society and to Nick Lock and Al Pool of the RWF Museum for additional information about Dafydd. 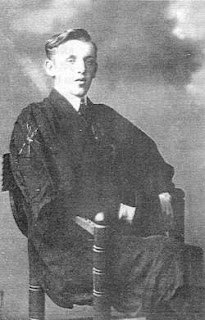 Daftdd was born in 1893. His parents were Thomas and Elizabeth Ellis.  Dafydd was their second child of five children, and their eldest son.  He grew up on Penyfed, the family farm, which his father leased as a tenant farmer from Colonel Mainwaring, on whose estate it was situated.

In 1913, Dafydd graduated from the University College of North Wales with a BA Hons in Welsh.  While at university, he met Albert Evans, who became famous as the Welsh poet whose Bardic name was Cynan and who later became the Archdruid of Wales.  They became friends and joined the Welsh Student Company of the Royal Army Medical Corps (RAMC) together. Posted  to Salonika, they were separated for the first time in four years and served in different units.

By all accounts, Dafydd was a prolific writer. For instance, we are told that he wrote an elegy to David Jones, nicknamed 'Dei Llwyn Cwbl', son of Robert and Margaret Jones of Llwyn Cwbl farm, Llangwm, Uwchaled.  Jones, who was a talented harpist, was killed serving in WW1 with 1st Battalion, the Welsh Guards (Private, no. 2101) in France.  He died of his wounds on 7th January 1917. Dafydd Ellis wrote:

The fervent song of his sweet harp is silent;

his cottage is in darkness;

leaving his sojourn and his hymn.

On 15th June 1918, Dafydd disappeared from a British Forces camp a few miles north of Salonica.  His body was never recovered but he is remembered on the Addenda Panel of the Doiran Memorial in Salonika, Greece. Dafydd Ellis e is also remembered on the WW1 Remembrance plaque in Soar Congregational Chapel in  Glyndwr, Maerdy, Clwyd, Wales.

In 1946, Dafydd's friend Cynan published a piece of ‘romantic fiction’ about his friend’s disappearance.  Entitled "Y Ffarwel Weledig”, it was a veiled attempt to outline Ellis’s possible escape to a life amongst the local people - the Vlachs - as told to Cynan in a letter from a fictitious Welsh soldier serving in Macedonia during the Second World War.

Clive Hughes of the Royal Welch Fusiliers Museum tells us “ There’s a biography of him by Alan Llwyd and Elwyn Edwards – “Y Bardd A Gollwyd:  Cofiant David Ellis”  (164 pp) (Cyhoeddiadau Barddas, 1992).  It's in Welsh, but interestingly doesn't refer to him by any other than the English forename.

Here is one of Dafydd Ellis's poems in Welsh:

Poem sent to me by Sheila and Jim Maxwell of Harlech Old Library and Institute, Wales
Here is a wonderful translation of the poem kindly done for us by Clive Hughes from Bangor, Gwynedd - I can visualise Dafydd seeing the eagle and wanting to send it soaring through the sky over to his home in Wales from Macedonia across the war zones
“The Cywydd* of Sending the Eagle to Wales” (A Cywydd is a Welsh poetry form see below)
(after Welsh Medieval poet Dafydd ab Gwilym)
With the appearance and illusion of Summer
Across fruitless Macedonia,
And the cannon ceasing
On the hill it's ravaging roar,
A high eagle we saw,
Fluent its turn, gleaming its look,
And to him on the spot
Now give him strange greeting.
Happy in costly
Colours of dawn, soars an eagle
Away yonder across myriad acres.
Leaves the burnt border of the east
Leaves the rose on brier branch;
Away to sight of Italy
And the costly pomp of the Summer Country..
The belovedness of the Middle lands,
And the sunshine gilding the land.
Then through...
Desert regions, the pastures of France,
Where are no leafy groves
Nor charming lovely building,
Nor tender speech of maiden
But the world's ache - the grave's echo.
On he flies, then tarries
On the green floor of Parlwr y Glyn.
There is my life's energy,
And there is, blessed am I,
The lovely district of Rhyd Lefrith,
And the day on the speckled hill-breasts.
Dafydd Ellis
(from the notebook he had with him in Salonica)
* NOTE: A Cywydd is one of the most important metrical forms in traditional Welsh poetry (cerdd dafod).  There are a variety of forms of the cywydd, but the word on its own is generally used to refer to the cywydd deuair hirion ("long-lined couplet") as it is by far the most common type. The cywydd consists of a series of seven-syllable lines in rhyming couplets, with all lines written in cynghanedd. One of the lines must finish with a stressed syllable, while the other must finish with an unstressed syllable. The rhyme may vary from couplet to couplet, or may remain the same. There is no rule about how many couplets there must be in a cywydd.
The first recorded examples of the cywydd date from the early 14th century. This was the favourite metre of the Poets of the Nobility, the poets working from the fourteenth to the seventeenth centuries, and it is still used today.
The cywydd deuair hirion and the related cywydd deuair fyrion, cywydd llosgyrnog and the awdl-gywydd all occur in the list of the twenty four traditional Welsh poetic meters adopted in the later Middle Ages.
Source:  Wikipedia

Article by Cledwyn Fychan on the website for the Society Farsarotul

Photograph of Dafydd from https://www.farsarotul.org/nl21_6.htm