A post by Historian Debbie Cameron who has been very supportive of this project since it began in 2012.   Debbie has written and published numerous articles about the First World War and has a Facebook Group - Remembering British women In WW1 -The Home Front & Overseas 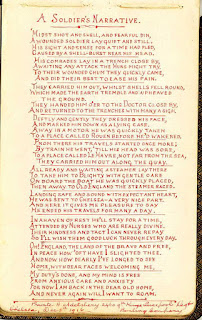 A poem written by a young soldier while he was wounded and recovering in  hospital in Chelsea, London, in a WW1 nurse's autograph book by Harold Anthony Adelsberg.

Harold was born on 29/1/1884 in Liverpool, Lancashire, UK. He was one of 13 siblings (3 of whom died) born to Johannes Karl Adelsberg, a printer/compositor, and his wife, Jane, nee Hughes. Educated at Clint Road Council Schooll, Edge Hill, Harold followed his father into the lithography trade and on the 1901 Census was apprenticed to a Lithographer.  This was his occupation on the 1911 census and 1939.

Harold enlisted on 22nd September 1914 and joined the King’s Liverpool Regiment as a Private.  He must have been injured in 1916, as that is the date on his poem. He was later transferred to the Labour Corps.  (I think due to being unfit for overseas service as he received the silver badge).  He married Mabel Cecilia Jeal in West Derby in October 1918. Harold died 1964.

Like his Father, Harold Adelsberg was a lithographer, so I wonder if that's why the poem he contributed to Phyllis Haviland’s authograph book is so beautifully presented.

The Autograph Book belonged to Phyllis Haviland, who worked as a nurse throughout the Great War. The images on the website are pages from her autograph book, in which she allowed wounded soldiers to draw sketches and write poetry. I believe she is the nurse photographed with her patients The  book contains sketches and poetry. While most of the content seems to relate to the time when she worked at St Marks Hospital in Chelsea, London, she may have moved to a hospital in St Albans later in the War. One or two of the later notes may have been made there.