for finding this poem for us 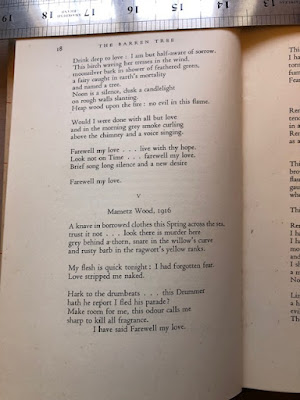 During the First World War, Llewelyn served in the Royal Welsh* Fusiliers, initially as a Second Lieutenant and later as a Captain, with the 15th (1st London Welsh) Battalion, on the Western Front.  The poem, which has been found for us by Nick Lock of the Royal Welch Fusiliers Museum in Caernarvon Castle, Caernarvon, Wales, is from Llewelyn’s WW1 Poetry Colliection “The Barren Tree”, published by . Penmark, Cardiff in 1945 - pp. 18 - 21.

About four thousand men from the Welsh Division were killed or wounded in the attack on Mametz Wood that took place in July 1916, during the First Battle of the Somme.  The wood still stands today and there is a Memorial to the 38th Division nearby.

Mametz Wood was large, overgrown and defended by experienced German troops.   The first attack, on 7th  July 1916, failed to reach the wood. Welsh soldiers, who were expected to make a frontal assault in daylight on German positions, were machine-gunned as they moved across open fields.

Mametz is a village in the Somme Departement in France on the D 64 road, about 20 miles (32 km) north-east of Amiens and 4 miles (6.4 km) east of Albert. Fricourt is to the west, Contalmaison to the north, Montauban to the north-east and Carnoy and Maricourt to the south-east. Mametz Wood is 1,000 yards (910 m.) to the north west. 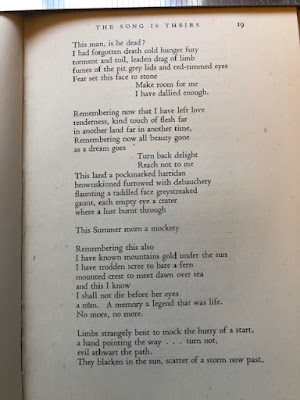 Llewelyn’s brother Watcyn Emil Owen Griffith was killed at Mametz Wood in July 1916.  Watcyn was born in 1897.  He joined the Royal Welsh Fusiliers like his elder brother and served on the Western Front with the 17th Battalion.  He was killed on 10th July 1916 and has no known grave.  Watcyn is remembered on the Thiepval Memorial in France, Pier and Face 4A.
Llewelyn felt responsible for his brother’s death.  Here is an extract from his book “Up to Mametz: “It was nearing dusk when Taylor came up to me. 'I want to have a word with you,' he said, drawing me away. 'I’ve got bad news for you…' 'What’s happened to my young brother… is he hit?' 'You know the last message you sent out to try and stop the barrage… well, he was one of the runners that took it. He hasn’t come back… He got his message through all right, and on his way back through the barrage he was hit. His mate was wounded by the shell that killed your brother ... he told another runner to tell us.' 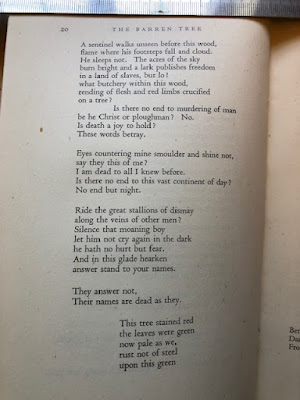 'My God ... he's lying out there now, Taylor!…' 'No, old man ... he’s gone.' ... So I had sent him to his death, bearing a message from my own hand, in an endeavour to save other men’s brothers; three thoughts that followed one another in unending sequence, a wheel revolving within my brain … “. 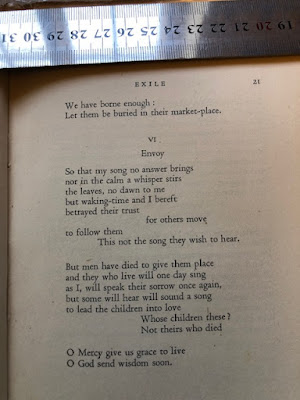 “Mametz Wood, commemorating the Welsh during the Battle of the Somme July 1916” is a painting by Welsh artist Christopher David Williams RBA (7 January 1873 – 1934). 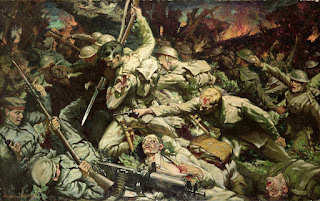 The Red Dragon Memorial to the Welsh at Mametz Wood 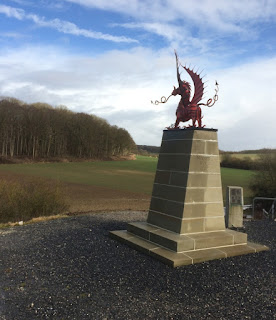 The memorial, designed by Welsh sculptor David Petersen, was unveiled in 1987.
A Welsh red dragon on top of a three-metre stone plinth faces the wood, tearing at barbed wire. It was commissioned by the South Wales Branch of the Western Front Association following a public funding-raising appeal.
The memorial is located near the site of the engagement in northern France. It can be reached from the village of Mametz on the D64 road.
The Welsh Dragon (Welsh: Y Ddraig Goch, meaning the red dragon, pronounced [ə ˈðraiɡ ˈɡoːχ]), is a heraldic symbol featured on the national flag of Wales.
*NOTE: The Royal Welch Fusiliers (In Welsh: Ffiwsilwyr Brenhinol Cymreig) - a line infantry regiment of the British Army and part of the Prince of Wales' Division - was founded in 1689 shortly after the Glorious Revolution. In 1702, it was designated a fusilier regiment and became The Welch Regiment of Fusiliers; the prefix "Royal" was added in 1713, then confirmed in 1714 when George I named it The Prince of Wales's Own Royal Regiment of Welsh Fusiliers. After the 1751 reforms that standardised the naming and numbering of regiments, it became the 23rd Foot (Royal Welsh Fuzileers).  After the 1881 Childers Reforms, Ithe Regiment’s official title was The Royal Welsh Fusiliers, but "Welch" continued to be used informally until restored in 1920 by Army Order No.56.
The Royal Welch Fusiliers Museum is in Caernarfon Castle in Caernarfon, Gwynedd, North Wales. To find out more and book a visit please visit their website https://www.rwfmuseum.org.uk/index.php
Sources:
“The Barren Tree”, published by Penmark, Cardiff in 1945
Find my Past
https://www.cwgc.org/find-records/find-war-dead/casualty-details/787687/WATCYN%20EMIL%20OWEN%20GRIFFITH/
Posted by Lucy at 07:42