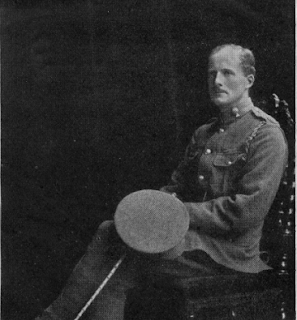 William Kersley Holmes was born in Kings Norton, Worcestershire UK in 1882 – the birth being registered in the third quarter of the year – i.e. July/August/September.   His parents were William Charles Holmes, and his wife, Amy Eleanor Holmes, nee Kersley. William had the following siblings: Geoffrey M.K. Holmes, b. 1878, Robert K. Holmes, b. 1880, and Olive K. Holmes, b. 1881.

The family moved to Scotland when William was little and went to live in Dollar, Clackmannshire.  Educated at Dollar Academy, William worked in a bank until the First World War began, when he joined the Lothian and Borders Horse Regiment as a Lance-Corporal. He saw action in France and Belgium, before being transferred to the Royal Field Artillery and promoted to the rank of Second  Lieutenant.

He joined General Dunsterville's Dunsteforce Expedition to Russia in 1917.  Throughout the war, William kept a diary in which he sketched all aspects of army life. Descriptions of life in the trenches also appeared in his poetry.  Williams’s WW1 collections were:

After the war his writing led him into journalism and then publishing – he worked as editor for children’s books with Blackie & Son, creating much of the content of the Blackie’s boys’ and girls’ annuals and contributing many children’s stories to BBC radio. Hundreds of pieces of light verse signed ‘W. K. H.’ were published in Scottish magazines and newspapers, and in national publications such as “Punch”, and “Country Life”.  William’s hobby was hill-walking, which inspired “Tramping Scottish Hills”, published in 1947 and “On Scottish Hills”, published in 1962, both illustrated with photographs he took.

William died on 7th August 1966 in Alloa, Scotland after a brief illness and was buried in Dollar Churchyard.

“The Neutral” by William Kersley Holmes

A haze of dust floats up from marching feet

Along our homely roads;

The little town, so quiet as it stirred

Where peace was wont to brood;

The mutterings of world-wide war surprise

The heart of solitude.

Changing the world we knew;

The men we are forget the men we were

In all we think and do.

And yet, impartial, patient, as of yore,

from “More ballads of field and billet, and other verses” (Paisley : Alexander Gardner, 1915)

Find my Past, Free BMD  and

For more information about William, and an appreciation of one of his poems, please see Dr. Connie Ruzich’s website Behind Their Lines https://behindtheirlines.blogspot.com/2017/08/eating-chip-potatoes.html